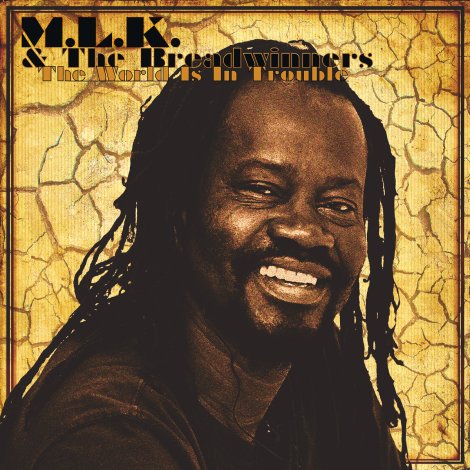 Start your week off right with some authentic, analog roots music with reggae vibes from Amsterdam via Sierra Leone and M.L.K. & The Breadwinners on their latest release The World Is In Trouble. These sediments ring true more today than they have in the past, as our world is definitely set to a soundtrack of turmoil as of late. With eleven conscious tracks brought right to the people, the Lp mixes Breadwinner riddims right up along side obscure Upsetters tracks that have been re-versioned in a Breadwinner style. An interesting mix of sides for the older heads to think upon, and the younger heads to stay woke as they say. Stand out tracks include “Tight Space”, with a human rights side that rings close to the refugee crisis around the world, “Babylon Sediments”, a track that bubbles like the chalices all over the world, “Face Of The Lion” (probably our favorite track on the record), ‘Rasta say rise and wear the face of the lion’, a track of strength and perseverance, while “Vibes Skillometre” corrects all the ill with a smokey riddim and message to the people and checking the vibe. The title track is the most conscious of all. “The World Is In Trouble” spreads the message of the word’s problems as rasta steps up high on the mountain and let’s all the masses know how bad off we are today. Politics, money, war, there is a crisis abound. We need to change our was or we are going to lose it all. We are definitely impressed at this record on a whole. It’s vibe is authentic, and it hosts some serious players as well. The ever talented saxophone player Nat Birchall on “Take A Good Look”, tenor player Stally, Sotunes on bass, and Jima Green on keyboards, who’ve both played on previous Breadwinner records. Alan “Breadwinner” Redfern, who plays multiple instruments throughout the entire record and produces this project as well contributes heavily and mightily. This record is one for the serious reggae heads who not only love their roots, but who can appreciate some re-versioned, far out tracks as well. Now we will have to go backwards and check out the rest of their discography and other tracks these fine musicians played on. Stream the entire record below and purchase the record, out now on Breadwinners Records via the following link.