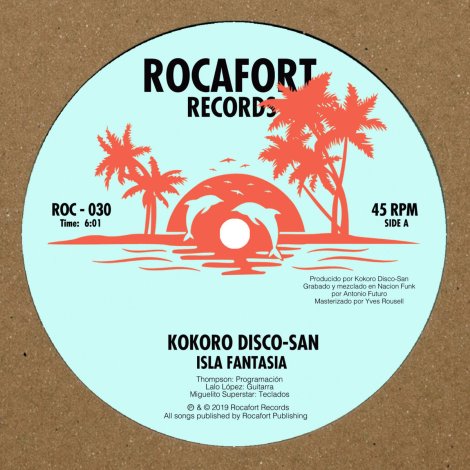 And just like that it feels like we are in full Summer swing (like 3rd Bass in “Brooklyn Queens”) because this new record that Rocafort Records has dropped has Summer written all over it. It’s got rooftop party, sunny seas side, or open air club in it for sure. Now you’re interested, what’s this record you say? Why it’s Kokoro Disco-San with “Isla Fantasia”. Put together by a supremely experienced trio of musicians from Barcelona, Spain, Lalo López, Miguelito Superstar, and Thompson, this crew puts out the high energy disco vibes on this twelve inch. They touch on some disco filled with jazz funk, giving you a good feeling of the better tracks that came out in the late 1970’s. It’s tropical, full of synths, has a tough 4 on the floor beat, and will no doubt have any party rocking that knows what good music is. Hell, if you can’t move to this you might have to get your pulse checked, for real. With inspiration on the backing vocals from where else, Brazil, it’s a Summer soundtrack we are really excited to drop. You should be too. The flip, “Sonic Feeling” stomps like the Brothers Johnson, and with more inspiration from bands like Azymuth and the Players Association, honestly it is a mover. And by mover we mean ass shaker, rump shaker, dance floor mover, and beyond. From Ibiza to Rio and all the spots in between, it just has that sound that is pleasing to the ears and body. Rocafort once again grab you by the shirt and pull you right on the dance floor with this one. Pure fire on both sides, it’s going to really be hard to get people to stop moving once these tracks are over. Check out both tracks below and pre-order after the stream.

Get the record here, out June 28th on Rocafort Records.

Jay Ritchford & Gary Stevans: Feelings 1974. @bewithrecords 2021 reissue.
Jesse Woods: Autoflower. Cosmic Dream 2017
When the @88strongtees package is waiting at your door from the post office. Fresh dipped from the man himself. Now even more people can ask questions about what's on my tees and I get to explain it.
Finally got to reconnect with my good buddy who is the son of the infamous Hugo of #hugosrecords. He had given me this 1960s Brazilian cabinet Hugo had kept his records in and it was sitting in pieces on the floor in my studio. So, with beers in hand he finally stopped by. He always said he wanted to sit, talk, and listen to his Dad's records with me.
I fought this record for years. I didn't want to like it. I loathed it. Then I really listened to it. Cheap, fantastic, and a great listen. Shout out to the Flip King who isn't on social media (says it's the worst thing ever invented) who pushed me to finally grab a good copy of this.
#45Friday new tunes