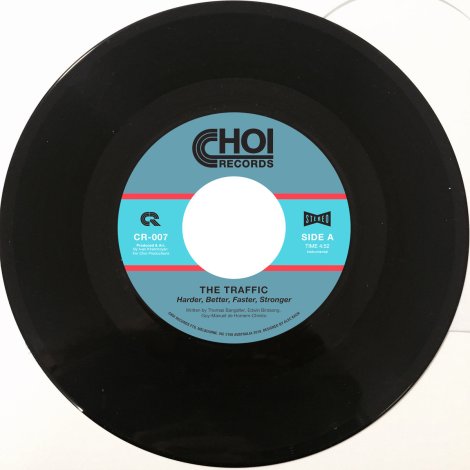 Coming hard and returning after their last great forty five, a slick cover of the Dre + Tupac classic “California Love”, Melbourne’s The Traffic are back once again with more heat for your turntable. This time the super funk crew take on Daft Punk’s “Harder Better Faster Stronger”. Jumping right into it, they hit it hard, really grabbing the original sample from Edwin Birdsong (“Cola Bottle Baby” for those keeping score) and revving it up even more than Daft Punk did. While they were recording the record, Edwin Birdsong would pass away, so this is a tribute from The Traffic to him. This record has a bit of everything for every one, with blazing horns, flute, hard drums, and an quick jump into ‘Da Funk” as well. Another top notch rework with sick production. The flip is an original called “Chasin’ Feels” featuring Thando & Francoistunes. Based on a Dwele beat, it has an afrobeat feel to it in the back, with some top notch horns and drum work. It’s a definite party starter, and although it may be a bit different than the other tunes you’ve heard from The Traffic, we have to be honest, it sits right up there with any new music of the style right now. This is a B-Side people, and it can most definitely be an A. This will for sure, get spins. It’s R & B vocals meets afrobeat horns and drums (flute too), and the solo at the end just proves how good The Traffic really are. Putting a track out with this much flavor, they really can’t lose. Another winner from The traffic and Choi Records. Keep your eyes out for a video for this as well coming down the pike sooner rather than later. This forty five is a pre-order, delivering at the end of August, so grab it because the others were jumped on fast. Listen to the record below: