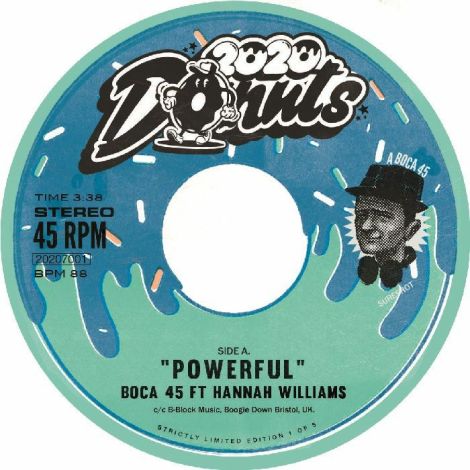 Today we have one of the best party-rocking DJs and producers dropping even more heat for your turntables. Boca 45, the man from Bristol, UK is back once again with his donut series for 2020. Dropping five, color, limited edition forty fives throughout the year, he’s started the two to the O with a collaboration with the soul siren Hannah Williams. “Powerful” b/w “Sparky Evans” is a screamer to start the year off. Williams, with her modern, but foundation feel soul vocals is accompanied by some super satisfying horns and a Cadet era backbeat that builds up like the rising waters of the Bristol Channel. Boca, who has already shown his prowess on the turntables for several decades, has been a superb producer as well in the past. This time, the production skills go front and center, co-writing the track with Williams and really diving deep into this opening project for the new year.

The over-arching themes of the lyrics are the abuse of power/privilege/wealth and general deceitful conduct which any person with half a brain cell can see straight through like cellophane. These are not exactly new themes, but I am hopeful this track will bring some soothing solidarity to those who are frustrated with the apparent breakdown of democracy we are now experiencing. You may be powerful but that doesn’t make you right!

The track itself is like the title says, powerful. Leaning in with some sociopolitical and deeper relationship themes, “Powerful” reminds us of an early ’70s punch at life by Etta James or Delia Gartrell. A stark reminder of the influence these powerful soul women have had not just on modern-day singers like Williams, but the world around them. The horn work echoes Williams wailing and message, combined with a backbeat of heavy proportions we’ve got a winner here. The flip, “Sparky Evans” is more of what we’ve become used to from Boca 45, a hip hop, heavy drum, sample frenzy party track. It’s like this and like that with added guitar to get your feet moving. Two tracks that are two different sides of the coin that rock in their own way. Solid indeed. The record will come housed in a high-quality card sleeve, color vinyl, and limited pieces. This record will not be pressed again. Is that a turntable? So get on it. Listen to a sample of both tracks below:

Get the record here, out February 1st.

Listen On Tune In

Spinning records tonight at @apbiergarten from 9pm to midnight for their Friday night So DJ series. First time at this venue so if you're in the #AsburyPark area swing through for the vibes. Old school #Annex crew in effect. #fleamarketfunk #vinyl #records #instadigger #instavinyl #igvinyl #cratedigging #recordcollecting #ditc #vinylclub #igvinylclub #nevernotdigging #nightlife #djprestige #beer