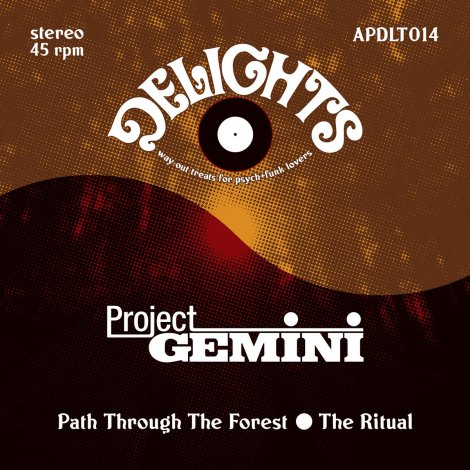 As we get past the first month of 2020, which let’s be honest, felt like five months instead of one, we roll right in with the first release off of the Delights label. And it’s a beauty. Project Gemini is back with a single and really a sneak peek to their full-length future Lp The Children of Scorpio. West London musical genius Paul Osbourne links up again with Markey Funk (on additional keys and production) along with Shuzin on the drums to craft two very fine sides. Fans of the band will remember their attention to detail as they weave through psychedelic, cinematic, and horror-themed tracks that also touch upon deep library music feels as well. This 2020 jump off is inspired by “European folk horror, baroque pop and classic Gainsbourg/Vannier works” and will give the listener two very different scenarios for each side. “Path Through The Forest” is the darker feeling of the sides. Coming in with a heavy bassline and Shuzin’s steady backbeat, it’s a trip through a dark and forbidding forest that may or may not have a good outcome. For us, the good outcome is the music, and the synth work on the back end really solidifies this soundtrack/ cinematic burner for us. And as the music ends, Osbourne makes the three disappear until side B. “The Ritual” is a definite slow burner of a side, reminding us of tracks that were on the Tower label, but more atmospheric. This side is a trip too, people. That prevalent bass line once again, those haunting keys, and a steady beat flow could easily fit into an early ’70’s devil movie (see Ernest Borgnine in The Devil’s Rain) or an equivalent in the modern-day. Another winner from Delights. We’re excited to see what they have in store for the rest of the year. The record is available on February 28th via their bandcamp.