What is Flea Market Funk?

Flea Market Funk is Jersey City, NJ-based blog and lifestyle web portal focusing on collecting and DJing Funk, Soul, Jazz, Hip Hop and Reggae music on vinyl. Founder, Creative Director and Editor-in-Chief Jamison “DJ Prestige” Harvey started FMF in 2007 and since then it has grown exponentially, preserving the music and culture of the DJ lifestyle authentically through reviews, original and guest mixes, interviews, and much more. With monthly visitors numbering 50,000+ and a site revamp in the summer of 2017, Flea Market Funk has no plans of slowing down anytime soon.

“DJ Prestige is doing the Lord’s work with Flea Market Funk. That is, if the Lord were a dedicated fanatic of vinyl and all its peripheral paraphernalia. Keep on preaching, brother!” – DJ Monk One/ Wax Poetics

To say that vinyl records are a part of DJ Prestige’s life would be a considerable understatement. A DJ and vinyl advocate for more than two decades, Prestige has been a vocal champion for all things “black wax” through hundreds of live gigs over the past 20 years, and at the acclaimed Flea Market Funk website. He is the definition of someone who practices what he preaches, and his insider view of the DJ and record collecting game make him one of the most respected names in the blogosphere, as well as the NYC area DJ scene.

DJ Prestige is doing the Lord’s work with Flea Market Funk. That is, if the Lord were a dedicated fanatic of vinyl and all its peripheral paraphernalia. Keep on preaching, brother!- Monk One, Editor Wax Poetics/ Historian/ DJ

On Flea Market Funk, which was founded in 2007, he celebrates legendary but often underappreciated Funk, Soul, Jazz, Reggae and Hip Hop artists while also preserving their work through original mixes, reviews, and live sets. This dedication has forged an airtight rep for Prestige and Flea Market Funk amongst record collectors around the world.

There’s no funk publicists and very few funk websites. There’s not even a funk option in the genre menus on Soundcloud and Tunecore. That’s how dire it is. So for one of those few prominent funk sites to be run by DJ Prestige – a student, fan, collector and DJ – is an extremely valuable asset to musicians and DJs who work in such an underrepresented and overlooked genre.” – J- Zone

DJ Prestige, who has spent his life in the NJ / NYC area, has toured nationally as a DJ on the Lava/ Atlantic record label as well as opened for artists ranging from Q-Tip, Bad Brains, and Joss Stone among many others while also doing parties for corporate clients such as Google, You Tube, Adidas, Universal Pictures, Victoria’s Secret, Major League Soccer,  Roark Revival, Random House, and more. He has been featured on ESPN and has also collaborated with Major League Soccer on their New York derby campaign in 2016.

“My man DJ Prestige has been keeping it real on the decks and at Flea Market Funk for years. We’ve dug together in the crates, shared the turntables at many gigs, and exchanged much knowledge. He is that dude.” – Larry Grogan/ Funky 16 Corners

Currently based out of Jersey City, NJ, he can be found at residencies including the Ace Hotel,  Friends and Lovers, and Bierwax,  in NYC, Antique Bar & Bakery in Hoboken, NJ, The Asbury Hotel in Asbury Park, NJ, as well as various parties around the country. 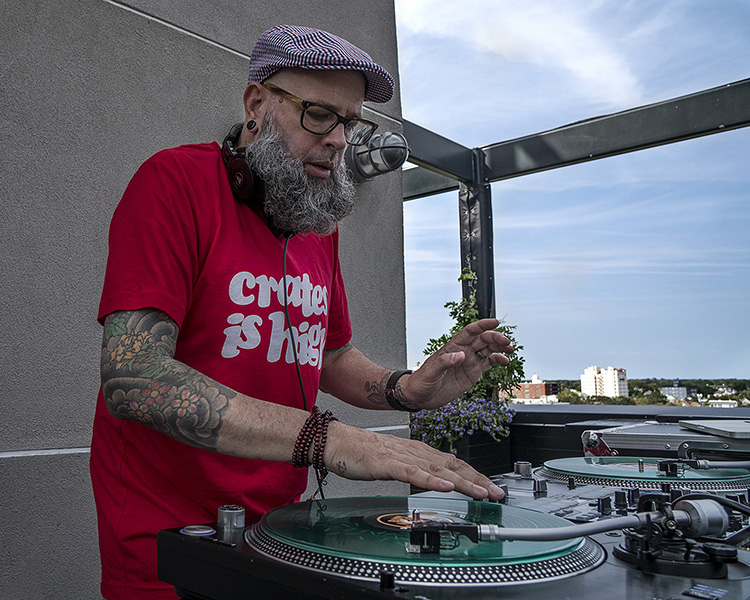 Photo Courtesy of The Asbury Hotel

Prestige was a Production Coordinator and Contributing writer on Eilon Paz’s acclaimed Dust & Grooves: Adventures In Record Collecting, the first photo book on vinyl collectors and their collections. He is also an active freelance writer, and is sought after for music reviews and social commentary on vinyl records and much more.

Prestige’s DJ style crosses genres like a good mix tape: Hip Hop, Rock, Funk, Soul, Reggae and more blend together seamlessly as he pays tribute to the philosophy of The Bronx in the 1970s.  A time where there were no musical boundaries, only good music that brought a diverse audience together and kept them moving and grooving all night long.

“I never was that guy that was comfortable hanging a piece on the wall. I’d rather have 1000 dollar records of quality that I dug up as opposed to 1 record that is a grand. I need to play what I find, this music has to be preserved and heard.”- DJ Prestige

WATCH THE 2020 DOCUMENTARY ABOUT DJ “THE HUSTLE IS REAL” PRESTIGE HERE.