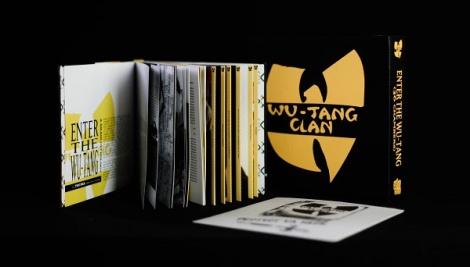 How about something for that hip hop lover in your life? The good folks at Get On Down have once again gone above and beyond on their latest deluxe box set with their latest offering, the Wu tang Clan’s Enter The Wu Tang Deluxe Vinyl Box Set. Created with full collaboration with the RZA, this massive, seven 45 rpm set (includes a bonus 7″) is basically everything you need whether you are a Wu Tang fan or just dig hip hop music and culture. Featuring a leatherette outer slipcase, 56 page casebook Shaolinthology written by journalist Chris Faraone, again with input from RZA aka The Abbott, showcasing uncovered Wu Tang topics never discussed, lyrics, rare photos, and advertisements from the era of Wu Tang, and two Wu Tang 45 adapters, this thing is massive. The deluxe box set is a dream for the Wu enthusiast, as you get all kinds of goodies besides the dope vinyl with this package. Check out the video below, and all the details of the box set after the jump:

-The entire set is housed in a premium leatherette outer slipcase

1A: Bring Da Ruckus
1B: Shame On A Nigga

3A: Can It All Be So Simple / Intermission
3B: Da Mystery Of Chessboxin’

5A: Method Man
5B: Protect Ya Neck

7A: Protect Ya Neck (Bloody Version)
7B: Tearz [aka After The Laughter Comes Tears]

Well done @momanisthetakeover on this latest 'zine + mix project Nigeria Nicer:1980-1991. Featured today on Flea Market Funk.
Salvator Dragatto: Mind On Madrid
Thanks to the good people at @bigcrownrecords for asking me to pick August's BCR 10s. A small grip of records I am feeling at the moment in no particular order.
Happy #45Friday
If there has been one dance record that I regretted not buying back in the day for $7.99 from Pulse Records in Red Bank, NJ (shout out to Mark Bee, Glenn Garcia + Jah-red) it was this one. The roulette wheel on the cover that drew you in and when you needle dropped it, you did it again and again. Let's not forget the Chaka Khan sample. If you were looking for the 45 on Virgin, it's jumped to over two bills easily. Imagine my surprise to see a new 12" cut from the original masters with an etched roulette wheel, a nod to Roulé 305 on the B.
Slightly obsessed with this reggae cover of Underworld's "Born Slippy" from Sokabe Keiichi & Inokasira Rangers on @parktonerecords
When a @doctorbionicband I don't have finds its way up to The Manor, I have to support. @jitterbugsightsnsounds bringing the heat.
"You have to buy all the reecords, not just thr 45s, it's a package deal", said Pete, my vintage furniture guy. I wanted the blue label Eddie Bo "Hook and Sling" and the metal 45 cases, so I'm said "Sure "