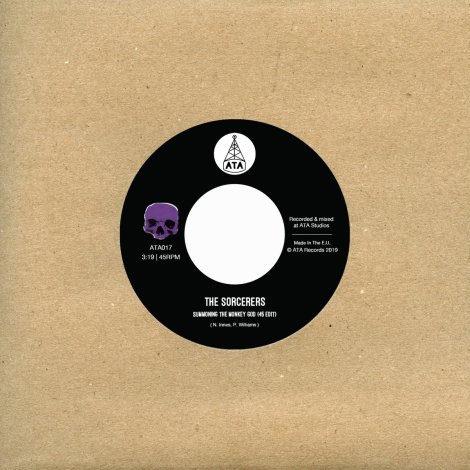 If you’ve missed the forty-fives and an Lp that The Sorcerors have put out, then you’ve missed some of the best ‘on the bubble’ music from one of the best bands out there. The backbone of the ATA Records house band, they are known to put in ingredients like Ethio-jazz, library music, funk, and soul into their musical pot. Effortlessly sprinkling in these elements and coming out with a hot, bubbling, delicious stew of aural delights, they are back once again with a seven inch of goodness. These tracks are taken from the forthcoming Lp In Search of The Lost City of The Monkey God, and bearing the same name as the title track, they go deep into it on this edit of the album cut. Hypnotic and rhythmic, we hear everything from vibraphone to bass clarinet to flutes, and with a heavy backbeat and guitar that won’t quit, the track builds up hard disappears into the black. It’s no mystery there where the song took you, or is there? The flip, “End Credits” is a European Library smasher, leaning heavy on that sound combined with early ’70’s Blaxploitation feels. There is also an alternate version of the track on the record, which both feature flutist Chip Wickham (‘Sombra’ & ‘Shamal Wind’ – Lovemonk Records). The dude produces some hot fire on both. Heavy, heavy percussion coupled with Wickham’s skills on the flute, the B-Side wins again in our opinion. It’s most definitely a track that is flying under the radar at the moment, but let’s face it, music this good doesn’t stay under wraps for long. Bobby Byrd said “Keep On Doin’ It”, and that’s what The Sorcerors are doing. Leeds, UK isn’t just Billy Bremer (although it’s hard to argue the man is a LEGEND), it’s got these legends representing as well. Have a listen to all three tracks from the stream below, and pre-order after that.