We all buy records for different reasons. Of course the music is obvious, but perhaps the motivation is record label, album cover, or discography based. Recently, I’ve heard some talk about record sticker searches as they were digging. These stickers vary from region to region, and just as I put some thought to it this weekend further, Free Drugs comes out with their Soul Bin Vinyl Record screen print. Following in the footsteps of designers we have spoken about on here, Mr. Krum, Mike 2600, and Rare Byrds among others, artist Michael Nielson takes his love for the Lp cover sticker to the the next level, and immortalizes it in a hand made silkscreened print. Michael and I spoke about this project and the motivations behind it. Here what he had to say in his own words:
“Over several years of diggin’ deep, I had developed an affinity for the variety of stickers on LP covers. I’m not going to front, for me it made sifting through all the crap a little more entertaining. They seemed to give a unique look back at how records were once marketed, with cheaply made stickers using archaic printing techniques mass produced and slapped on the front of the album luring the consumer in with “SUPER BUY” or “ADULT XXX LP” or simply the attraction of a lesser price.”

I first became inspired to create this piece when, all in the span of about a week, I dug up a large amount of rare vinyl gems for a few bucks each at a thrift store including an original undocumented LP label variation (which I came to find out was the actual first pressing) of Skull Snaps rare self-titled soul classic as well as the infamous Douglass High School’s Black Experience album, to name a couple. Many of them were still in shrink and many had these curious pieces of sticker ephemera still in tact. My obsession had spawned, and continues to this day. I had pulled and compiled many of my favorites, be it the trashy condition or simply the label preference, for this print.

A small selection of the stickers I decided to include are Roy Ayers Productions, Groove Merchant, Okeh, Paradise Garage, Musicland, Licorice Pizza, Funk-O-Mart, Amoeba Music, De-lite, Skull Snaps, Capital, Cream De Coco, “Adult” LPs, and RFC. And a few stickers were simply made up for my own amusement.” 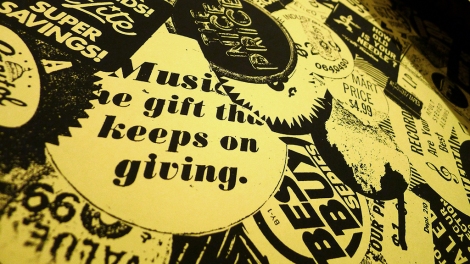 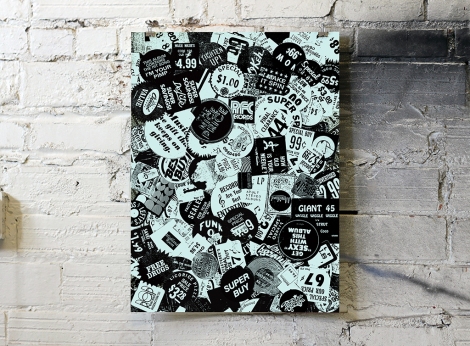 This print is perfect for the vinyl record lover, record nerd, or crate digger in your life. Hang it proudly in your record room, because it’s one of a kind. Get this limited edition hand screened print before it’s gone.

The print can be purchased on his Etsy shop until it is sold out.