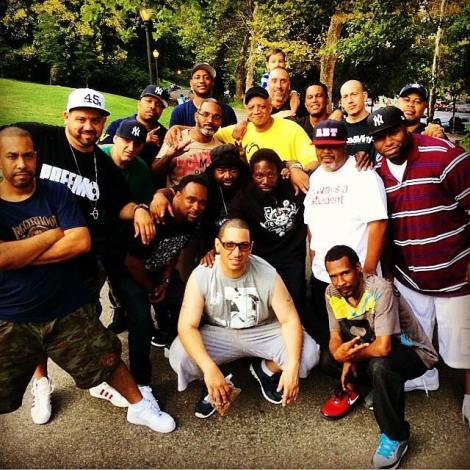 Photo Courtesy of Kenny Dope Just like the pioneers of hip hop who threw park jams and birthed the genre, the tradition continues today through The Tools of War’s True School NYC Park Jam Series. These Digger’s Delight events are legendary, and yesterday’s session was one for the history books. Drawing people from all over the City as well as all over the world, it’s a chance to see hip hop legends up close and personal for free. This Summer’s series of events were held in Harlem at 135th Street and Saint Nicholas Ave at Saint Nicholas Park. A natural amphitheater with a rolling hill and event area, there isn’t a bad seat in the house.

Louie Loo and DJ Jazzy Jay photo by Christe Z-Pabon Arriving early yesterday, while waiting to met up with our buddy Brian Coleman (of Check The Technique fame), a familiar face was setting up the sound system. It was none other than the legendary Jazzy Jay. Still doing it like they used to do it, setting up equipment, speakers, and getting ready to throw down. Where else in the world are you going to see a hip hop pioneer setting up his own stuff? At the Tools of War jam, that’s where. After a quick Soul Food lunch special at Yvonne Yvonne (get the smothered steak!), we walked back up. From the get go, it was a who’s who of hip hop all night. You had legends like Kid Capri, DJ Scratch, DJ Spinna, JuJu from The Beatnuts, Joe Conzo, JS-1, DJ Clear, DJ Eclipse, Charlie Ahearn, Large Professor, Breakbeat Lou, Danny Dan The Beatman, DJ Mellestar, and more mingling with the crowd. Hosted by Lord Finesse and impromptu emcee Kool DJ Red Alert (who Nesse called a bum!), the DJ line up was stellar: Forrest Getemgump, Kenny Dope, Louie Loo, and Jazzy Jay. They all dug deep that day to give the people a chance to hear what they wouldn’t hear every day, rare grooves and original break beats on vinyl. Forrest Getemgump brought out a stack of wax without covers and proceeded to kill it with drum breaks for his entire set. Doubles of country and rock bangers, he had jaws wide open with his selection of records. Kenny Dope was up next and had all the legends fiending for what was in his record bag. He played an hour of rare 45s that had heavy diggers like Finesse wondering what he was dropping. Seamless mixes and cutting doubles of 7″s had the crowd (many who couldn’t get the concept of 45s) and B Boys up rocking through his whole set. As if KD’s set wasn’t enough, Upper West Side legend Louie Loo (King Sun’s DJ) murdered an all vinyl set with scratched off labels that had Finesse and Red Alert oohing and aching. Last up was Jazzy Jay, who in true Jazzy Jay fashion cut doubles of classics until the jam was over.

Kool DJ Red Alert and Lord Finesse photo by Christie Z-Pabon
These park jams are a way for people to see how it was done back in the day. In the true spirit of hip hop, these legends give back to the people, let you live in the moment and just be. Enjoy the music, enjoy the culture and be at peace with your fellow man. It goes deep. There was no filming of the jam, and at one point they stopped and Finesse declared: “If we see you filming for more than 10 seconds, we are gonna break yo’ shit”. It was all in peace though, but a little encouragement from The Funky Man to live in the moment never hurt anyone. We encourage you to support these events, as it’s important to educate the public about the culture. We were just humbled being within such great hip hop company. If you’re in the NYC area, they run every Tuesday night at Saint Nicholas Park from 4pm until 8pm through September 26th. 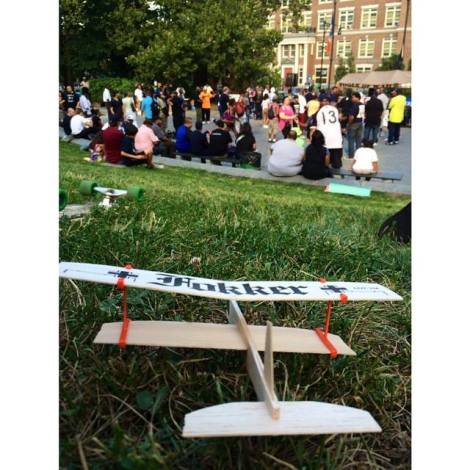 One response to “Doin’ It In The Park”