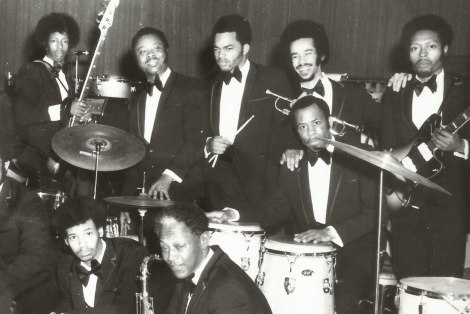 Photos courtesy of Rappcats
The world just got a little bit better as of yesterday. An announcement via Rappcats and Now-Again Records is one of the biggest we’ve heard in a while. It is the first commercial release of a J.B.’s record said not to exist and features a young Bootsy Collins. In the words of our friend Doc Nu: “Merlin’s beard!” This is a huge release for fans of the James Brown legacy, as well as music itself. Taken from a test pressing that never went public, this is the most exciting and experimental J.B.’s band ever IMHO. A vinyl only release and limited to just 3000 records worldwide, this will be the big one that got away if you sleep on it. Highlights include this incarnation of Bootsy and the young band doing a 12 minute take of Marva Whitney’s classic “It’s My Thing” with interpretations of Kool and the Gang, The Meters, and Hendrix throughout! Featuring liner notes by Grammy winning James Brown historian Alan Leeds, the music was taken from the original two-track master that The Godfather himself and engineer Ron Lenhoff submitted to the record company forty years ago. Specifically mastered for vinyl by Elysian Master’s Dave Cooley, this release will be out on November 28th, 2014 aka Black Friday. Let the JB frenzy begin, the rumors were true and this will sit nicely beside your copy of Pass The Peas. Packed with unpublished photographs and the aforementioned liner notes and booklet by Leeds and Egon from Now-Again, this is one record to get for 2014 people. Sell your silly rap 45s and get this in your collection ASAP. This kind of record doesn’t come around often.

Listen to snippets and pre-order the record here.