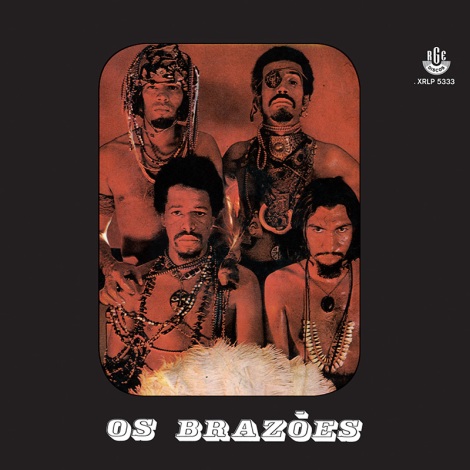 If you’re a fan of Brazilian music, the various movements that have taken place during its rich history, then you’re in luck. Mr. Bongo has dug deep to make this highly sought after self titled release available to the public. Os Brazoes S/T record from 1969 has long been sought after by collectors and appreciators of Brazilian gems. Now finally available in a high end reissue, you can spin this psychedelic, fuzz, samba, rock masterpiece on your turntable without having to fork over a mortgage payment. Originally formed in Rio De Janeiro in the late ’60’s, Os Brazoes backed the legendary Gal Costa during her Tropicalia period. Unfortunately, they didn’t record in the studio with her. Pure tragedy. This reissue, originally available on RGE Discos and now ready for all the world to hear, is amazing. Full of psych fueled, tropical samba rock and roll, Os Brazoes gives you a listen on what was going on in 1969. We will tell you what was going on: drums, and plenty of them, fuzzy, tripped out guitars, flute freakouts and acid filled beats, to name a few. Oh yeah, and some samba. This record is really bananas and there’s not much else like it around. It has to be heard to be fully experienced, so if you have been interested in Brazilian music, sampled some Jorge Ben, Gilberto Gil, Gal Costa, or hit up a Brazilian Nuggets compilation, this is a real treat. A genre we here at FMF wish we had got into twenty years ago. Alas, Mr. Bongo are enlightening record lovers one Brazilian classic at a time. Brazilian music is no joke, and an important part of vinyl record culture. This reissue is presented on a super high quality card sleeve and replicates the original artwork. Available February 22nd. This is one for the record shelves for sure.

Get the record from Mr. Bongo here.