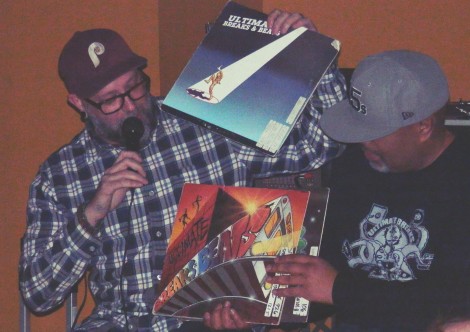 When people use the word hip hop, most have an interpretation of what they think it is. Some say it’s music, other may think hip hop is the way you dress or talk. On Sunday night in Jersey City, NJ, knowledge was dropped, and after walking out of this panel, if you were fuzzy on what hip hop was, it was made crystal clear. Hip Hop: Celebration and Documentation , was the first in a series of lectures and events put on by the New Jersey vinyl collective Open Crates and was held downstairs in The Monk room at Porta. In an intimate setting, we were honored to be asked to moderate this panel of hip hop scholars, which included vinyl record legend, DJ, and producer Breakbeat Lou, author/ historian Brian Coleman (Check the Technique 1 + 2, Rakim Told Me), and Koe Rodriguez of A Thousand Words apparel and lifestyle.

With an audience of hip hop enthusiasts, DJs, producers, as well as some hip hop legends in Crazy Legs from The Rock Steady Crew and Mr. Len from Company Flow, the three panelists gave their perspective on their contribution to hip hop culture. Breakbeat Lou broke down Ultimate Breaks and Beats, and how this series of records influenced the founding fathers of hip hop, DJs, producers, and reaches to mainstream artists today. His very deep knowledge of hip hop as a culture is matched by very few. Brian Coleman, whose series of books delves into the depths of classic and groundbreaking hip hop records and their history, spoke candidly on how his path led him to hip hop and why he does what he does. Koe Rodriguez, who captures a moment in time with his apparel through the lenses of photographers like Joe Conzo, Martha Cooper, and Jamel Shabazz among others, stressed the importance of the preservation of the culture for future generations to hold on to. At the end, questions were opened to the public. Crazy Legs kicked off that discussion and wanted to set the record straight about some remarks on the panel. As a result, the room had a debate on how preservation is great, but as places like Cornell and Indiana Universities specifically document the hip hop movement, the facts could get skewered. It’s easy to see how a legend like Legs is so passionate about getting hip hop facts straight. After all, he was there from the beginning  and is still carrying the torch from that time. That’s what we love to see, a good natured, sometimes heated debate on hip hop history.  A complete success in our opinion.  All in all, the hour or so panel could have debated and talked all night, but there was vinyl to be spun. Break Beat Lou jumped on and dropped a few forty fives. They were more like heavy heat rocks like The Charmels “As Long As I’ve Got You” and doubles of Can’s “Vitamin C” and other heat before Open Crates regulars DJ ACL and Big Jack held down the 1’s and 2’s for the duration of the event.  It’s this type of event we are happy to participate in, helping to preserve hip hop and vinyl record culture.  In the true spirit of hip hop, the each one teach one attitude was alive and well last night in Jersey City.  Look for more Open Crates events and lectures here.

One response to “Open Lessons Recap”

Shout out to @mrbongoworldwide for this banger of a forty-five. @surprisechef "The Positive and The Negative". Pure class
"If I were to name the three most precious resources of life, I should say books, friends, and nature...." - John Burroughs
When the @uspostalservice finally "finds" your mailbox that you get 3 to 5 record deliveries alone every week. Funny how @amazon @fedex & @ups never have trouble finding where I live. Thumbs up Postal Service! America, good job!
This hot slice just arrived from @fspotrecords in LA. @nightowlsreggaesoul with a cover of the Rev. Al Green's "Let's Stay Together". Another banger boys.
Early morning meditations with Pharoah Sanders 1969 Impulse! journey "Jewels of Thought".
Sometimes the 🌞shines on a 🐶's behind. Right place, right time for this white label promo Quad Sound of the awakening - mirage from 1973 on Black Jazz Records. Definitely one that doesn't just "show up" often, especially in The Catskills. Reasonable purchase plus a few other gems I'll post later.