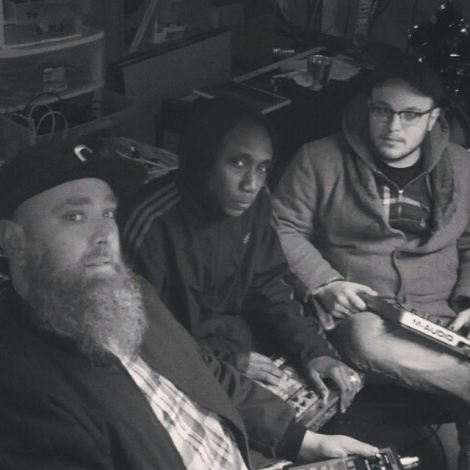 “We make our beats with the old methods, the old ways. We listen to our music the old way.”-Guttah Grey

Back in the day if you wanted to make a record and didn’t have the money, you did it one of two ways. You either funded it yourself, or you got signed to a record label. If you couldn’t do either, the you were shit out of luck. Fortunately, in today’s music climate you have options. Hello Kickstarter. Kickstarter has help funded some really dope projects since its inception. One that came down the pike recently is Ayatollah presents: COLOSSUS. COLOSSUS are comprised of Queens based producer Ayatollah (Mos Def “Ms. Fat Booty” among others), and Guttah Grey and Blue Healer from Portland, OR. These champions of vinyl formed together like Voltron and created an all hip hop instrumental album. Not just any, old instrumental album. Like the name suggests, COLOSSUS is massive on all fronts. With beats ranging from grimy to uplifting head nodders, they are trying to fund enough scratch to get the record pressed in a limited edition of 500 copies. They have 22 tracks already done and mastered, so the project just needs to pressed up on black crack. Once the money is raised they will only press 500 copies of the record, no more. We are excited about that concept. So you either get it now, or don’t get it at all. Fortunately, we have heard the entire record, and it is amazing. Steeped deep in the boom bap, these three know what dusty digging is. Fans of artists like DJ Shadow, Grave Diggaz, and J Rocc will rejoice in this trio’s unique production and sound. Personally, we are going to back this project, and we know that the readers of Flea Market Funk appreciate good music, so we would be remiss if we didn’t pass this project along to all of you. Projects like this come along only once in a while, so don’t sleep and thank us later as you nod your head. Who loves ya baby?

One response to “Ayatollah presents: COLOSSUS”