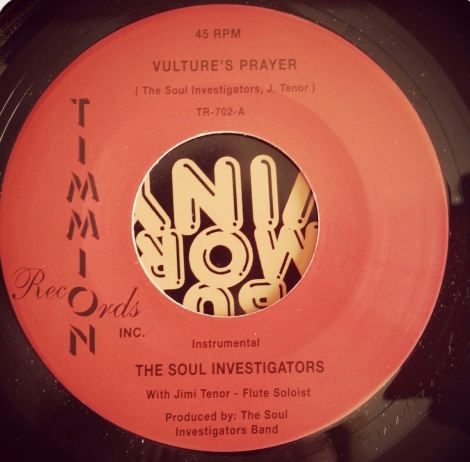 It’s always refreshing to hear a new record out of the Timmion Records camp. When it’s a new Soul Investigators 45 , it’s even better. The powerhouse funk and soul label out of Helsinki, Finland is churning out quality 45s on the regular. “Vulture’s Prayer”, the new single from everybody’s favorite funk and soul band is here and it’s funky. Pulling off their best Creed Taylor production, this tune could easily be a CTI side that was shelved since the 70’s. But it’s not. It’s 2015 and the Investigators get with it with the flute on this one. Their heavy drum sound is still there, but we’re talking about some funky soul they deliver like your postman. Consistency is the key here, and they show how versatile they can be on these tracks. Quality percussion all around, we are in love with this sound. A sound that shows how well rounded the band really is. Some great vibes present at the end, and when there is a flute and vibes together, we couldn’t be more pleased. The flip, “Bad Vibrations” is another slow drag of a side, heavy on the flute with a steady guitar and backbeat all the way through. It’s like a JB’s song on 70 bpm instead of 122. The funk is still there though, and if you didn’t think that these cats were influenced by a variety of early players including the Meters, listen closely. A short flute break down will have you clapping your hands now, doing the chicken scratch at the last minute. Again, it’s not the Meters, but Investigators time. The flute duties were held by the impeccable Jimi Tenor, who in plain English just kills it. A great combination and a great direction to go in on this seven inch. Run to your computer and get this slice of goodness, it’s just what the doctor ordered.

One response to “The Soul Investigators – Vulture’s Prayer”