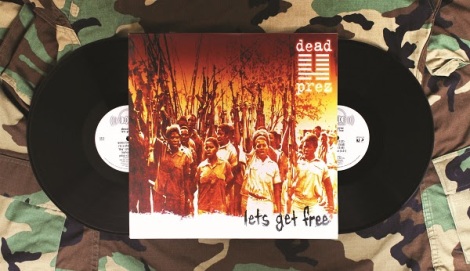 The cats at Get On Down are at it again, and this time they’re giving one of the top five political hip hop records of all time another spin. A certified Get On Down Classic, this 2 LP plus a 22″ x 22″ poster package will open the door to new fans and old heads alike. In 2000, when puffy, shiny suits, waving your Rollie side to side, and producers singing on your record were popular, dead prez stomped in with their big black boots with Let’s Get Free. Following in the footsteps of The Last Poets, Watts Prophets, and political hip hop godfathers like KRS-One, Public Enemy, and The Coup, dead prez were not rapping about money, cars, and women, but preaching a healthy lifestyle, Black Nationalism, and Pan-Africanism in their rhymes. A conscious effort that was well before its time. 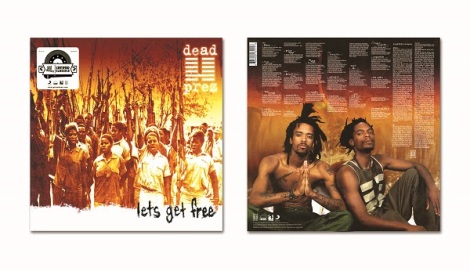 With socially aware singles like “Hip Hop”, “Mind sex”, and “I’m An African”, the record went even deeper with album cuts like “Wolves” “We Want Freedom” “They Schools” “Propaganda”, and one of our faves “Be Healthy”. dead prez were talking about realness, not some fake lifestyle. They believed what they were preaching and they were living it. Like we said, ahead of its time 15 years ago, but standing the test of time today. Production by Lord Jamar from Brand Nubian and Hedrush, the Loud Records release was praised by everyone from The Source to CMJ to Rolling Stone and beyond. Critically acclaimed, if you didn’t catch this the first time, Get On Down has you covered. An essential early 2000’s hip hop record for your crates, dead prez can help get you free. Free from bad music, and that’s a fact.

A good start here at @telegraphnl in New London, CT. Dope shop with a great selection of old and new records. Stop by and support this local, long running staple of the NL music scene.
Oooh they did it again!
Well done @momanisthetakeover on this latest 'zine + mix project Nigeria Nicer:1980-1991. Featured today on Flea Market Funk.
Salvator Dragatto: Mind On Madrid
Thanks to the good people at @bigcrownrecords for asking me to pick August's BCR 10s. A small grip of records I am feeling at the moment in no particular order.
Happy #45Friday
If there has been one dance record that I regretted not buying back in the day for $7.99 from Pulse Records in Red Bank, NJ (shout out to Mark Bee, Glenn Garcia + Jah-red) it was this one. The roulette wheel on the cover that drew you in and when you needle dropped it, you did it again and again. Let's not forget the Chaka Khan sample. If you were looking for the 45 on Virgin, it's jumped to over two bills easily. Imagine my surprise to see a new 12" cut from the original masters with an etched roulette wheel, a nod to Roulé 305 on the B.
Slightly obsessed with this reggae cover of Underworld's "Born Slippy" from Sokabe Keiichi & Inokasira Rangers on @parktonerecords