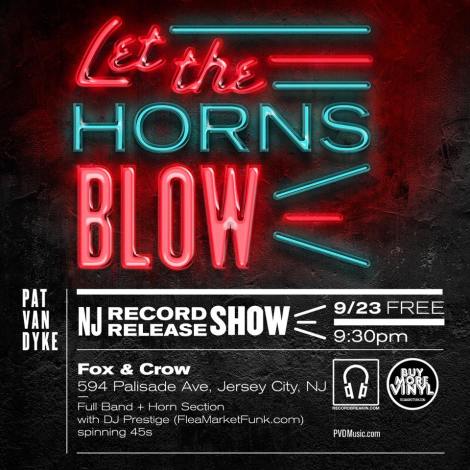 Big weekend for the Flea Market Funk camp this weekend people. On Friday September 23rd, we are teaming up with Pat Van Dyke, his full band (with horn section) at our home away from home in Jersey City Heights, the Fox & Crow to celebrate the release of PVD’s new record Let The Horns Blow. Out today, Van Dyke and company will be playing selections from the record plus old favorites in the Parlour of one of the best venues in JC. We will be there too, providing a funky soundtrack of seven inch nuggets from our crates. Copies of the record out on Record Breakin’ Music as well as tee shirts will be on sale at the show. Fox & Crow is an intimate space, set up like an old jazz club, so be sure to get there early to get a good seat. You might even be able to touch Peter Lin’s trombone you’ll be so close. Good food, good music, and of course good people all around. It’s like a concert in your living room, and your closest friends are invited.

Saturday night, 9/24, we will be getting down in Brooklyn once again with our brother Monk One. Overheard recently, “Monk One is that dude.”, and they were right. Known for his deep, deep crates in many genres, this is our second installment of Shake! at the esteemed Friends and Lovers in Brooklyn. Shake! is all about the groove, and both of us bring our 45 RPM boxes filled to the brim with joints (or jawns if you’re from Philly) that are funky. Classics and future classics ride along side deep funk, proto-disco, and classic breaks. The first installment drew a break dance troupe from BK as well as a wide variety of people who wanted to dance to the break of dawn. We have a special treat, as emcee and host Glenn “G-Man” Holt will be in the house holding down the mic, so any time dude is in the house it is always a pleasure. FNL has a back patio for your smoking pleasure, plus the sound system BUMPS. All the more reason to get yo ass to BK Saturday night. Both events are free, so we hope to see some familiar faces as well as make new friends. Music is the message people. See you on the dance floor.

When the @88strongtees package is waiting at your door from the post office. Fresh dipped from the man himself. Now even more people can ask questions about what's on my tees and I get to explain it.
Finally got to reconnect with my good buddy who is the son of the infamous Hugo of #hugosrecords. He had given me this 1960s Brazilian cabinet Hugo had kept his records in and it was sitting in pieces on the floor in my studio. So, with beers in hand he finally stopped by. He always said he wanted to sit, talk, and listen to his Dad's records with me.
I fought this record for years. I didn't want to like it. I loathed it. Then I really listened to it. Cheap, fantastic, and a great listen. Shout out to the Flip King who isn't on social media (says it's the worst thing ever invented) who pushed me to finally grab a good copy of this.
#45Friday new tunes
For those who don't have @vinylmeplease , I'm talking to you. They've got some fantastic records available in premium packaging. You even get to swap the record of the month if you're not down like I do from time to time. This month's was Usher (no thanks) so I took a chance and switched to this 2004 release from The Books "The Lemon of Pink". Not quite as dancey as the Avalanches but sample heavy and just great.
When the @wax_poetics #2 version 2.0 is waiting on your doorstep.