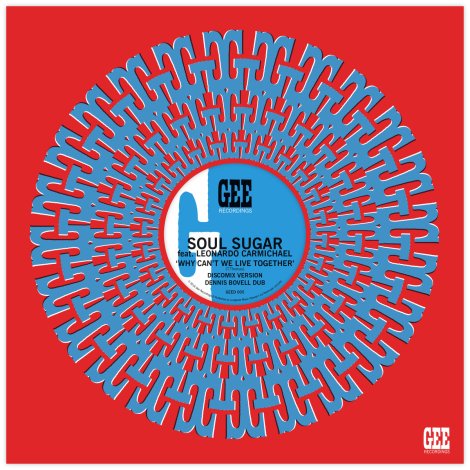 Today’s feature is a proper reggae cover of this massive side from Soul Sugar featuring Leonardo Carmichael. With Jahno on drums and syndrums, Thomas Naim on guitar, and Guillaume “Gee” Metenier on keyboards, the band slides through one of the best songs of Timmy Thomas. It comes at a great time, as here int he United States we are running into dark times, racial unrest, and fake news propelling people to speak up on matters they are ill informed on, prompting hysteria and fear throughout this great country of ours. Gee Metenier knows how to put out a proper reggae record, and his dedication not to just funk, soul, jazz, and especially reggae is really a testament to his abilities as a musician and producer. Lining up, as always, great tunes (whether original or cover), and a terrific bunch of rotating musicians in Paris, his choice of Leonardo Carmichael to sing on this track is perfect. Growing up in Jamaica, Carmichael was influenced by his father and mother, eventually linking up with Beres Hammond’s daughter Nastassia to write and perform music with. Leonardo’s voice is spot on on this side, which gets am extended Discomix as well as the Dennis Bovell Dub as well. Remember people, keep an open mind, love your brothers and sisters no matter what color they are, listen and think before you speak, and always embrace the Spirit of ’69, that promoted racial harmony. We can all live together, and a track like this is one that unites. Large up the Soul Sugar crew for this heat rock from France. Check out the track below: