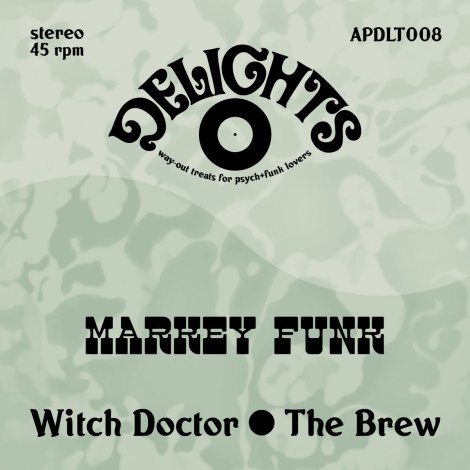 Markey Funk returns with another forty five that pushes the funk envelope with heavy psychedlica. “Witch Doctor” out of the Delights label is a full of hard drums, creepy organ and synths that he calls ‘psychsploitation’. Inspired by European exploitation records from the ’70’s, it’s based on a drum break recorded by Dan Mayo (CRuNCH 22) on a mobile phone. Complete with eerie yell, “Witch Doctor” takes you there and back and embodies that sound those exploitation records were laying down in that period. The flip, “The Brew” is the soundtrack to that long lost biker movie that you found at the flea market. Super limited release (150 pressed) that will also come with some exclusive stickers as well. Another heat rock from Markey Funk, who has a penchant for releasing authentic funk records of all kinds. This particular record goes down the psychedelic highway, so get on your chopper, put on that sleeveless denim vest and ride into the sunset. Stream both sides below: