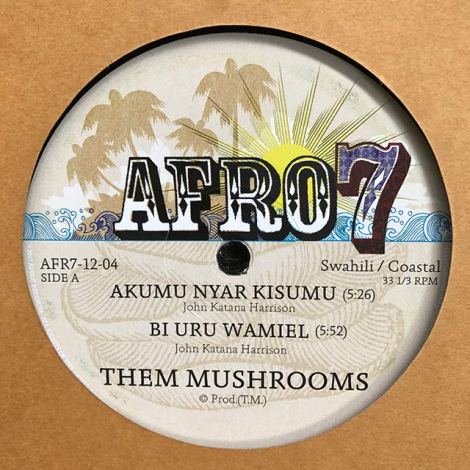 We are always amazed when we hear a hot disco stepper like this by Kenyan group Them Mushrooms. A platinum artist that remained on top of the charts, even when foreign disco joints dominated the airwaves, Them Mushrooms, who are celebrating their 45th anniversary get a nice reissue 12″ record from Afro7. These four, very synth heavy tracks are a great introduction to the band if you are not familiar. The tunes are taken from very rare, out of print Kenyan 45s and a privately released album that were remastered by Carvery Frank just right for maximum dance floor appeal. Fully licensed, this record is more than official. With tracks such as “Msondo Ngoma” and “Ndogo Ndongo”, dance floor fire to say the least, these sides are ready to keep the parties moving until the sun comes up somewhere in the four corners of the globe and everywhere in between. Afro7 have done a bang up job on getting these tracks to the public, including a super deluxe, heavy Lp cover designed by California artist Steve Roden. A great edition to your African dance collection. But don’t wait, these are limited to one per customer and will most definitely not last long. More African heat coming your way, this time a heavy synth dance party that will blow minds and have feet moving from Mombassa to Minneapolis and beyond. Don’t sleep.