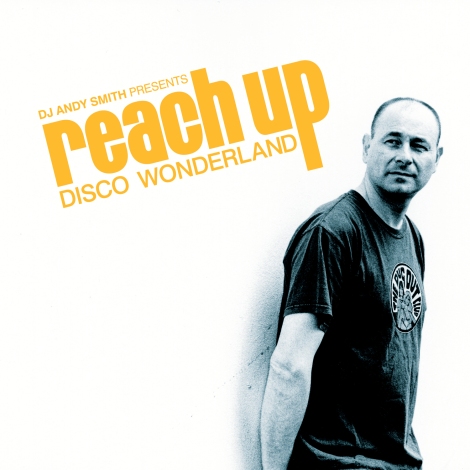 DJ Andy Smith has been a name on the world DJ stage for quite some time. A true champion of all music that is good, his genre bending Document mix series has inspired a generation of diggers and DJs to dig deeper in their sets. He’s taken on vaults of vinyl from Trojan Records, stood atop official Northern Soul mixes, and through his live shows and radio programs, has pioneered music that needs to be heard and preserved. This time, he’s taking on disco, and with BBE’s help, his new project DJ Andy Smith Presents Reach Up: Disco Wonderland is out today. This concept was born from his Reach Up crew which he founded in 2012. It was put together in the spirit of legendary clubs like The Paradise Garage and Studio 54, where customers would hear ’80’s boogie, disco, proto house and all the sounds of dance culture that was laid like bricks on a historical house designed by architects like Larry Levan and Nicky Siano. Combining the obscure and some well known tracks together, you may have you’re “Oh shit!” moment when you hear certain songs, a pleasant, euphoric feeling coming over you on the dance floor or in your headphones. Approaching this compilation with respect and the mentality of a B-Boy, he had this to say about the project:

At my ‘Reach Up’ and ‘Boombox’ nights a fair few of these will have been played, but interestingly some of these tracks might well get played at more ‘hip hop orientated’ nights I do too because of the disco breaks.

This comp is a road map of many sides that have been played in Smith’s DJ sets throughout his career. They are tracks, some known, some obscure, but they both have one thing in common: You can move to them. He has a knack for getting you to move your butt, and this project will do just that. Andy Smith himself is a busy man with many gigs throughout the globe, as well as his Soho Radio show, and a residency with his Reach Up crew (Nick Halkes and Crissy Kybosh) in London at the Bussey Building. With this new project, he shows no signs of slowing down.

Check out a mix sampler of the project:

Get the record, out today on BBE here.