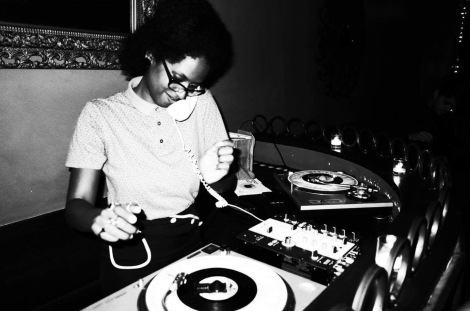 Name, Location, What You Do:
Selam aka Miss Hap. Ridgewood, Queens. I work at Record City in lovely Prospect Lefferts Gardens and DJ mostly reggae, rocksteady and dancehall records as much as possible.

Favorite Records at the Moment:
I am absolutely obsessed with “Never Run Away” by Chester Miller, this killer rub a dub 12” from 1986 I just got at RC. The intro on that tune has these blazing saxophones and the mastering on it is simply pristine. Wicked!! Mr. Miller is apparently a nice man too. Another 12” that I dig that I sold recently to a dear friend of mine is “Jamaica Bolero” by Tommy McCook on Studio One. I think it is one of the best Studio One tunes I’ve ever heard, instrumental or with vocals. Beautiful drums and steady vibes. “Come Me Just A Come” 12” on Blue Mountain by Tenor Saw that I’ve had on hold for quite sometime now hahaha. I am sure I will buy it eventually. My all time favorite would have to be “Right Now and Not Later” by the Shangri Las on Red Bird. Nothing will ever top that George Shadow Morton-produced Northern Soul sweetness in my book. But also, Jamison, I loved that Soul Makossa 45 you dropped the other night at Shake! Like my roommate and fried Natalie and I went ballistic to it. Classic, toppa top! Thank you for that.

Best Digging Story:
Digging in Central Havana last summer where every album and 45 was sold at a flat rate of 5 Cuban pesos. Found a bunch of killer mambo and salsa LPs. Dope!!

Favorite Mix and Why. Any Genre, Any DJ.
Queen Majesty’s Trilla mix of reggae covers of 80s and 90s that came out I think it was 10 years ago. Also this mix on SoundCloud of a live recording of a block party in Elmhurst, Queens. 127 Park Nu Sounds circa 1977 Side A by hass718. I love it because of the old school sound system aspect of it and the infancy of hip hop that’s so prevalent throughout. Always listen to it either on a good or crappy day.

LP, 12”, or 7” format?
7” format for sure. I don’t know what it is. Even before I started selecting I already liked listening to them. It’s like owning a piece of a tune as corny as it may sound.

Junk Food You Can’t Live Without:
Loves me some Fuego Takis!! Just salty snacks in general other than beef jerky. Blarf!!

Most Memorable Gig Played:
Would have to be playing at When Dance Was Nice over a year ago. It’s a reggae dance held three times a year at Al Paragus HQ basement in Flatbush on a proper sound system. Organized by none other than Mush One. Just an old school rub a dub dance. I was supposed to be the opening selector until midnight but the second one never showed up. So I ended up playing from like 10 PM till 2 AM just when it was prime reggae time and more people started rolling through. Screechy Dan and Jonny Go Figure did a little number over Boxing riddim. Magical. So much fun rocking the vibes and truly one of the best memories ever.

Record That Never Leaves Your Record Box:
45 called “If You See Jane” by The Yardbrooms with “Mary Poppins” by Tommy McCook on the flip. One of the sweetest rocksteady tunes that I like to drop when transitioning between eras. I also just snagged the fankalicious “Day by Day” by Derrick Harriott 45 and that’s definitely now in the “never leaving my box” category. Also, “People Make The World” by the Chosen Few. Can’t forget the murderation on that one!!

Shout Outs, Last Remarks, and Gig Info:
Every first and third Sunday I will be playing at Milo’s Yard in Ridgewood, Queens from 10 PM till late. Big up Clark Garnier for putting the thing together even though I was negligent about following up for months! I will be there next Feb. 4. Every second Monday, I will be at H0l0 also in Ridgewood with my boys Mighty Redeemer and Tony Conquerrah. Shout out to James Steiner and Tony whose actual last name I forgot! Truly one of my favorite peoples in life and always learn a lot from their sets. If you have not been to either spot yet definitely do so. And sometime in February or March, my homey, mentor, boss and proprietor of Record City Ian Clark aka DJ Wicz (shout out to that guy too!) and I will be repping the store alongside the Mobile Monday crew at the Bowery Electricas part of their month long record store showcase.. Will keep you posted once a date is cemented. Large ups to my girls Natalie and Emily of Traze pizza, the best pop up pizza around, my sister Leah, the borough of QUEENS and to you Jamison aka DJ Prestige for the interview! Nuff respect, boss.

One response to “Big Ups With DJ Miss Hap”

When the @uspostalservice finally "finds" your mailbox that you get 3 to 5 record deliveries alone every week. Funny how @amazon @fedex & @ups never have trouble finding where I live. Thumbs up Postal Service! America, good job!
This hot slice just arrived from @fspotrecords in LA. @nightowlsreggaesoul with a cover of the Rev. Al Green's "Let's Stay Together". Another banger boys.
Early morning meditations with Pharoah Sanders 1969 Impulse! journey "Jewels of Thought".
Sometimes the 🌞shines on a 🐶's behind. Right place, right time for this white label promo Quad Sound of the awakening - mirage from 1973 on Black Jazz Records. Definitely one that doesn't just "show up" often, especially in The Catskills. Reasonable purchase plus a few other gems I'll post later.
I passed this up about two months ago and when I flipped to it yesterday, I thought: why am I not grabbing this Lp Wayne Henderson on trombone and Paul Humphrey on drums? So I did.
Normally we'd be promoting our Shake! Brooklyn tonight, but because of the Omicron surge, we've decided to pause the party for January. It wasn't an easy decision, but we feel that for everyone's sake this is the best thing to do. We will be back in February.