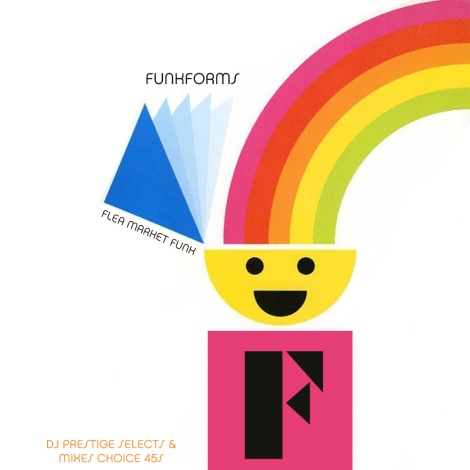 Funk comes in many shapes and forms, and when we started Flea Market Funk over a decade ago, we were deep in it. There is something about it that just grabbed us. The heavy drum beats we couldn’t get enough of, the regional bands trying their best to imitate JB, the shattered hopes and dreams of people who just wanted to play music but never made it big really spoke to us. We were always into the funk, and when we opened our minds to the bands of today that were doing it the same way they did it back then. we knew that we were on to something as well. We love all kinds of music, but we will always return to the funk. So today’s mix is a bit over due. We haven’t done a full on funk 45 mix for quite some time. That’s not to say that we haven’t been digging the records up. This mix has sixteen tracks that we’ve been digging on and playing out for a while.

We love all kinds of music, but we will always return to the funk.

Some are records we have dug up in the field. Others have been preserved by record labels such as Federal Green, AOE, Big Crown, and People’s Preservation, while other present day labels like Galaxy Sound Company, Funk Night (and the pre-Funk Night Frank Raines produced) G-Rated label lay down some of the hottest cuts in the last twenty years. These tracks are full of that grease you need to to get the funk wheels moving right. Several records deal with the inner city, and a message to the ghetto, pro-black anthems that are deep, while we have one Mandrill cover song, some West Coast funk teetering on the modern sound, a heavy and gritty dance number, an Isaac Hayes reworking from the multi-tracks, a true James Brown rip off (that is that good), and a deep funk cut that was right before disco among others. Like we said, these are tracks we have been playing out and really digging as of late, and we just couldn’t keep them in the box. It was time to make them into a mix. So with inspiration from these artists and a little visual inspiration from the great Paul Rand, please enjoy Funkforms. This mix was done as we always do it: all live and in one take, because you never get a second chance to do it live. If you dig it, please pass it along to a friend.

Listen to the mix here.