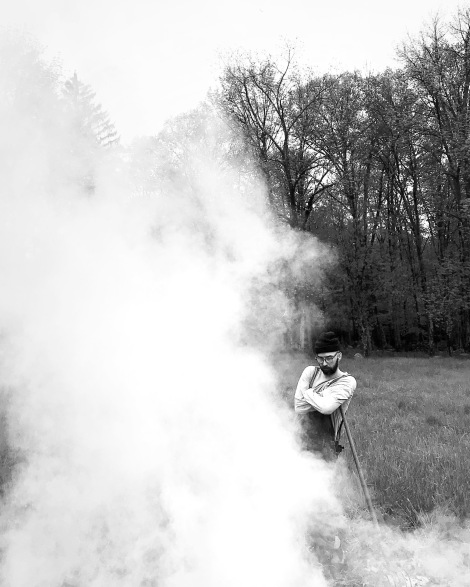 Name, Location, What You Do:

Jason Trammell (jaytram) Bed Stuy, Brooklyn. I work with sounds and play the drums. I create music under the name Jaytram .  I have most recently been drumming with Sinkane and the Atomic Bomb! Band. Playing the music of the late Nigerian funk master William Onyeabor. I also work as a sound designer/mixer and foley artist.

Influences:
Soul music, which to me, encompasses all styles of music. Stumbling upon unexpected recordings and sounds. The drums, film, nature, the arts, people.

Favorite Records at the Moment:

Been listening to Babylon by Dr John, Basil Kirchin “s my friend, Book of Sound by the Hypnotic Brass Ensemble, Yaqaza by Sea Urchin and that first NRPS record. There’s a bunch more.

It would probably have to do with a few different spots and thrift stores that used to be in Savannah Georgia in the late 90’s. Finding all kinds of goodness just laying around for a quarter.  Finding a gang of jazz records in a used furniture store in Gastonia, NC. Hoping the lady at the register couldn’t get her man on the phone to double check if the records were all still a buck each.  Getting to dig through the collection of my friend’s father’s old friend who had passed.  It was beautiful to see all the music that he had lived with throughout his life. The pieces I got from his collection really opened me up to a lot of great music.

Favorite Mix and Why. Any Genre, Any DJ.

One that comes to mind is David Holmes essential mix 98/01. Because I had never really heard a mix that jumped around genres so heavily. I was really inspired by that.

I like them all. And tapes in there too.

Junk Food You Can’t Live Without.
I stay away from it, but if those peanut butter filled pretzel bites are around, I will crush them.

Most Memorable Gig Played:
Probably playing drums with Pharoah Sanders. The whole Onyeabor thing was great. Played with so many good folks whose music I love. Playing in Sudan with Sinkane was also really special. All the early gigs with my friends in front of nobody were also some of my favorite. As far as DJ gigs, just playing out w/ my friends at bars,  or with my cousin the night Prince died. That was a total bummer, but playing his and all the records he was a part of was so good.

✌🏽❤ to everybody. I usually play records at Doris in Bed Stuy at least one Thursday a month. Usually the first Thursday. I call it little Friday. I also have a bunch of old mixes up on mixcloud,  soundcloud  and more music on Version Tapes.