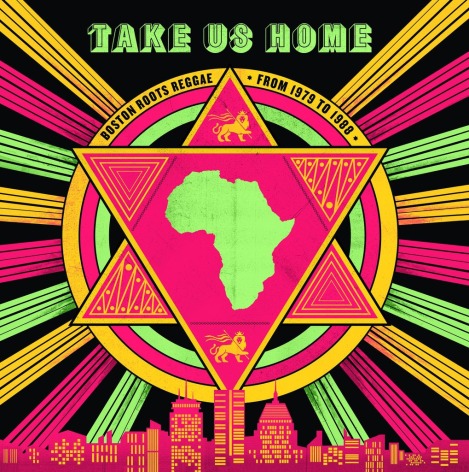 Taking its pedigree deeper into music history, the Cultures of Soul record label takes a look at reggae music in Boston, MA in a new compilation Take Us Home: Boston Roots Reggae from 1979 to 1988. In the 1970’s, reggae music spread from the shores of Jamaica and landed in a most unlikely place. This place was known for racial division, street justice, violence, and reggae music, unknown in the States, was an unknown explorer stepping foot into the city in the early ’70’s. By 1973, The Harder They Come was embraced by Boston’s student population, making it a cult classic and opened the doors for reggae stars from all over the world to dip their toes in the waters of this American city. It wasn’t the students that just championed reggae music, but the city of Boston would go on to foster producers, singers, and musicians, all who would connect and form a reggae scene throughout the city’s various clubs. These were integrated bands playing for integrated audiences at a time where racial tensions were very high. An incredible feat and a hat tip to Beantown to say the least. On the comp, bands like I Tones, Zion Initiation, and Lambsbread lead the way, and Cultures of Soul is reissuing many of these records for the first time ever. These would include Danny Tucker’s “Our Father’s Land”, “Love Is A Pleasure” by Zion Initiation, and “Two Minute Warning” by Lambsbread among others. We know that Boston has a rich musical history, but who knew how deep and how connected the city was to reggae music itself? This was a time when reggae artists were just planting the JA flag on the shores of the United States, and even then Bob Marley had a tough time breaking through at first. This scene in Boston thrived though, and along the way helped facilitate the expansion of this great music. Once again, Cultures of Soul gets the word out to the masses with this compilation. With help from Boston‐based music journalists/historians Noah Schaffer and Uchenna Ikonne, the label compiles the cruicial cuts from the time with a 2 LP set and 28 page book that documents the entire scene through interviews, photos and the like. A must have not just for reggae lovers, but music lovers as well.

Buy the record from Cultures of Soul here.