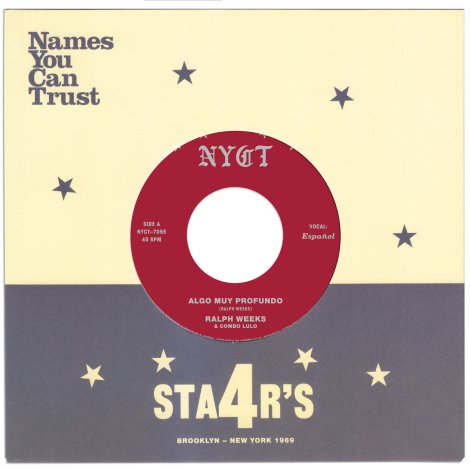 Today we have a huge release of epic proportions. NYCT, one of New York’s top labels, connecting the dots from NYC to Latin America and the Caribbean (and doing it quite well we might add) and trailblazing releases like this one. “Algo Muy Profundo”, a 50 year old track that Panamanian crooner Ralph Weeks wrote on the spot in Brooklyn a half of century earlier is resurrected and reconstructed by both Weeks and NYCT with help from the also talented Combo Lulo. This timeless track is repurposed into a beautiful rocksteady ballad and presented lovely in both Spanish and English on the double sider. The label offered Weeks the chance to one, work with a talented, present day band who are familiar with this man’s lifetime of work, and two, a studio atmosphere that brought him back to when he was gigging around Prospect Height, Brooklyn five decades earlier. It was a match that was meant to be. Ralph Weeks voice has not aged a bit. It’s crisp as a September morning, and he has no problem hitting those falsetto parts with ease. We previously highlighted Weeks in a reissue of one of his latin funk heater 45s earlier this year, but this, my friends, is a whole different animal. This is Weeks at his best, his silky smoothest, and his most beautiful. Both tracks, “Algo Muy Profundo” and “Something Deep Inside”, redone and formatted in the style of Jamaica, backing music by Combo Lulo, engineered by NYCT, and featuring the timeless voice of Ralph Weeks run just like the title says, deep inside. This record will hit so many sets: the lowriders, the soul balladeers, the reggae heads, and the oldies lovers. It is a track that crosses genres and generations. This is real music. It may have taken fifty years to bring it together, but perhaps this was the song’s time. NYCT has a knack for cooking up marvelous musical meals on a record, and this one is one of the best. Listen to the track below, and order the 45 after the stream.