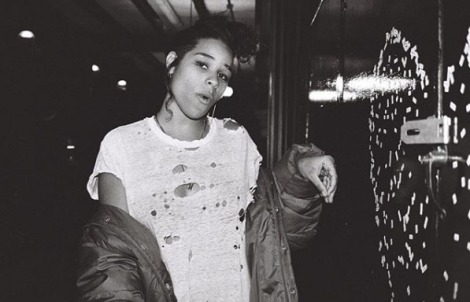 Name, Location, What You Do
Fly Hendrix; BK, SF, Cape Town. Currently hiding out with my records in my home studio outside SF in the mountains.

I am a record collector. I started DJing professionally in 2012 when I started a party in Cape Town, South Africa. Things went really well and I realized people loved the music that I love. And the story goes.. in the most recent years after digging around the world, I have been honing in more on my sound and my collection in general. I realized that there is a central focus to the music that I love- it is mostly a product of or influenced by the African diaspora and carries an essence of soul. I have a very extensive African collection and have been focusing on getting this music back out into the world in a way that it can be received.

Influences:
Let’s see.. the list is long.. I have been a musician since I was 12. Started out singing a lot of RnB, hip hop, soul/funk and reggae. So, Lauryn Hill, Erykah Badu, Chaka Khan, James Brown, Parliament, Stevie Wonder, Marvin Gaye, Mos Def, Nate Dogg, D’Angelo, Sade, OutKast, Bob Marley, Peter Tosh, Richie Spice, Sizzla. The blues- Ray Charles. My dad sings like Ray Charles. And Jazz: I grew up on Quincy Jones, Ed Harris and Les McCann, Roberta Flack, Marlena Shaw, Herbie Hancock, Earth Wind and Fire. Actually, EWF was like my 5-year-old inspiration, haha. Once I started DJing, my taste expanded from there. I became very attracted to electronic music that was.. sexy.. so like, Little Dragon, Loco Dice “7 Dunham Place” was the first house/techno record that got me going. Mount Kimbie, old school Diplo (Florida), James Blake – I called the genre “electronic soul”. That love deepened into Detroit and Chicago. Once I discovered black people doing house music that was pretty much it for me. Moodyman, Carl Craig, Kerri Chandler, Theo Parrish- I feel very musically aligned with those guys. The evolution of Motown in Detroit is really something else. And then there is Africa, Brazil, and Mexico. I moved to South Africa in 2009. I spent the majority of my 20’s living and bouncing between Cape Town and the US. During that time, I was exposed to the magic of African music. Fela Kuti broke down walls I didn’t know existed. I learned the sheer power of music as a movement while I was in Africa. I watched it bring people together that would otherwise not feel comfortable connecting. And that was magical and very influential in my career. That is pretty much where a big part of my head is at right now. Recognizing that so much music is rooted in Africa.

Best Digging Story
Yo, this story is a book in and of itself. To keep it short- my best digging story is probably the most exciting one. I was in Amsterdam on a layover, I ventured out to find red light records and found myself on the most absurd tour of the sex district with a man that I’m pretty sure had every intention of killing me but ended up really taking a liking to me. He approached me while I was a bit lost and confused and asked: “why so serious?”. Never mind that is the jokers catchphrase before cutting a smile into their face; totally unaware, I replied: “I am seriously looking for red-light records”. he told me he would take me there. But when we got there, it was closed. Anyway, I decided it was fate that this middle-aged widows peaked stout of a man would be my guide for the day. The first thing he told me about himself was that he was gay and I shouldn’t be worried. When I told him my mission in life was to discover the soul of every city, he insisted that we go to a gay porn cinema. No matter how much I turned him down, he carried on and on about it. As the hours passed by, we learned more and more about one another. Through the lingering distrust and skepticism, we began to grow closer. Eventually, we passed by the cinema and he begged me to come inside. The next hour of my life was spent riding a line between trust and fear. By the end of the saga, we both busted out into the street laughing, having reached a genuine understanding of one another through his trials and tribulations. He pushed my limits and in doing so he gave me the opportunity to know myself better, and to know Amsterdam better. The streets felt different after the experience. I felt a greater sense of belonging. I realized that he wanted me to experience the true grit of Amsterdam. Which could have been death, or it could have been exactly what it was. And I know that I surprised him as much as he surprised me.

I could go into more detail but that would only be appropriate for like some magazine on sexuality haha, this is about music- so getting back to that, what I love about digging for records, it always leads me into the soul of the world. The two are aligned. Sometimes dangerous yes- but always real and always, always beautiful. It took a lot for me to give in to this man. One step at a time. It started with music and it ended with a full understanding of a city I had never been to before. I know that as long as I trust the music, I trust in that path- Digging will always take me where I need to go.

Favorite Mix and Why. Any Genre, Any DJ.
The first DJ mix that struck a cord in me. I heard it while shopping at Truth Clothing on Haight street in SF when I was like 13. DJ Gaveegav, the mix was called Test Press Volume 1. It was just one of those mixes that was good for any occasion. Any. It has this Paul nice remix of Sade, Cherish the Dre. So hot. My car was always the one to be in on the way to or back from any party. I would say it was a hip hop RnB mix with some twist. And that is very much a big part of my style today. Always a twist.

LP, 12”, or 7” format?
Love it all. For different reasons. 12” are great.. you get the extended version plus a remix, instrumental and sometimes an a cappella.. sound quality is always robust for playing out. LP’s are beautiful for home listening. And 7” are great for traveling. They keep me on my feet and keep a fast pace in the party. Love it all. Total vinyl head over here.

Most Memorable Gig Played:
Hard one! Damn. Hmmmm… any Vinyl Digz in 2012. Ok, the January Party. No wait- the boxing gym party- we turned a boxing gym in the basement of a church that hadn’t been renovated since the 70’s into a venue for one night. We themed it “what do you fight for” and it was in celebration of Ali Forman fight in Kinshasa 1974 – my homie Ntone came through and played only music from Kinshasa 1974 for 2 straight hours and the whole place was bright like the sunshine. It was incredible energy. What made it my choice gig, is that someone told me that they had not felt this sense of community since during apartheid days when they all went underground to be together. That one got me. Best set for me personally would be a night at The Waiting Room in Cape Town; double encore- the first close was “As” by Stevie – crowd was insane; second closer with “Fallin’ ” by Alicia Keys and the whole room was singing. Magical. 300 sweaty people shouting about falling in love.

Record That Never Leaves Your Record Box:
Eddie Kendricks 12” “Girl You Need A Change of Mind”.