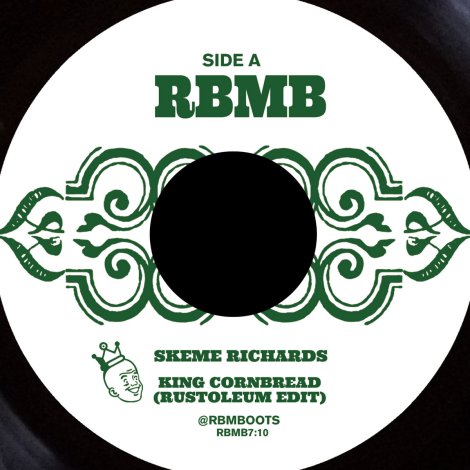 The Nostalgia King returns and with another doubled sided forty five to surely enhance your turntable as well as get the dance floor moving. He links up with RBMBoots once again and it’s a hit no matter how you look at it. The A, King Cornbread (Rustoleum Edit) is a raw and gritty funk track that is the soundtrack to the streets of Philadelphia and the surrounding areas, with a tribute to The City of Brotherly Love’s graff writer Cornbread. Born in Brewerytown (and the record goes full circle with some help from Brewerytown Beats with the tracks), it is a fitting sound to Philly’s founder of graffiti, and one of the most widely known writers before street art went commercial.

Perfect for those who like to rock doubles, sample, or play the dancefloor. A killer double-sider of rare heat. Definitely, what would’ve made its way onto comps had it been found. #UnGoogleable shit.

The flip, “Streets of Itaewon (Kimchi Edit) is a horn-filled, Far East influenced upbeat funk track. Think of it along the lines of the “The Chase”, but unknown. It’s fast and funky, so be prepared to put the needle down several times on both sides. Featured on Richards Shifting Gears Volumes 1 + 2 originally, the Nostalgia King takes the best parts of both tracks and edits them in a way to give more appeal (to preserve the originality of the tracks) and also for DJs to be able to rock doubles at their leisure. Also, recommended for producers who need that tough sample or two. Skeme’s been at it since the ’80s, marching to the beat of his own drum, preserving DJ and pop culture the only way he can, flawlessly. Check out snippets of both tracks below. The record releases on May 29th. Limited run of 300.

Inside outside come around...
#45Friday
This promo was a nice pick up. Couldn't resist.
Good night, @pharoahsandersofficial
This big old crazy bastard decided to swallow the lure. I was alone so I extracted quickly, tried not to get bitten and got him back in. Not the biggest of the day, but put up a good fight.
@djsaucylady & U-Key
Brotherly Love #BigLove
Just what is it that you want to do?