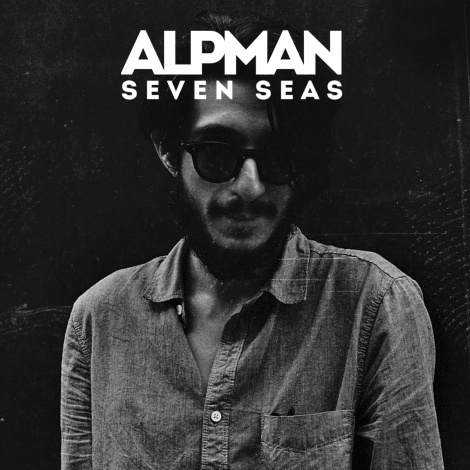 When we hear a new record from an artist we championed here at Flea Market Funk from the beginning, we are excited to share. Aplan, hailing from Istanbul, Turkey put out a banger of a 45 in the past on Kept Records. We’ve followed this talented musician’s career in his native Turkey since that record, and Alpman’s been a busy boy. When not doing music and being sponsored by some of the biggest corporate companies known worldwide, he started working with his band, The Midnight Walkers. Playing shows, making music, and building their name up is just what they did. This 45 is just a drop in the bucket of the music they made, and we are excited to premier this on FMF today. A talented multi-instrumentalist, Alpman makes moody, psychedelic funk rock music. Heavy on the guitar and organ, his tunes are left field, far away from the mainstream, and further off than most independent funk and soul releases. His sound is special, and we’re delighted to hear him expanding with a band and releasing interesting records for the masses.

Teaming up with The Midnight Walkers (Umut Çetin, Ali Somay, and Baran Göksu), he’s put out another keeper of a seven inch for your record box. “Seven Seas” is a guitar driven, organ laden side funk psych rock side that gets Alpman’s influences right on the table from the get go. Picking up and and expanding where that Kept 45 left off, Alpman continues to shred this tune with fuzzy guitars and spooky organ. This reminds us of a lost cut on the Vampyros Lesbos soundtrack, a trip down the rabbit hole of funky psychedelic breaks, moody organ riffs, plus a heavy dose of fuzz to keep it nice. The flip, “Behind The Ocean” is a track that could easily be featured on a television or film soundtrack. Its Middle Eastern funky vibe is apparent all the way through. Packed with subtle, yet hard enough drums to get the job done, there is a sweet little combination organ and drum breakdown in the middle that makes us happy. ‘Rock Spychedelic’ as Alpman calls his music, is still alive and well. As the song fades and the organ, and drums get heavier, the songs makes its exit. Now we want more, so Alpman, give us another single soon! As Alpman and the band gear up for a Spring tour of Italy, we’re only hoping to see this talented crew on the shores of the US in 2015. So, booking agents, if you’re reading, get these guys to NYC and beyond. Listen to both tracks below.

Get the record on Melting Mountain Recording Co. here.

Jay Ritchford & Gary Stevans: Feelings 1974. @bewithrecords 2021 reissue.
Jesse Woods: Autoflower. Cosmic Dream 2017
When the @88strongtees package is waiting at your door from the post office. Fresh dipped from the man himself. Now even more people can ask questions about what's on my tees and I get to explain it.
Finally got to reconnect with my good buddy who is the son of the infamous Hugo of #hugosrecords. He had given me this 1960s Brazilian cabinet Hugo had kept his records in and it was sitting in pieces on the floor in my studio. So, with beers in hand he finally stopped by. He always said he wanted to sit, talk, and listen to his Dad's records with me.
I fought this record for years. I didn't want to like it. I loathed it. Then I really listened to it. Cheap, fantastic, and a great listen. Shout out to the Flip King who isn't on social media (says it's the worst thing ever invented) who pushed me to finally grab a good copy of this.
#45Friday new tunes