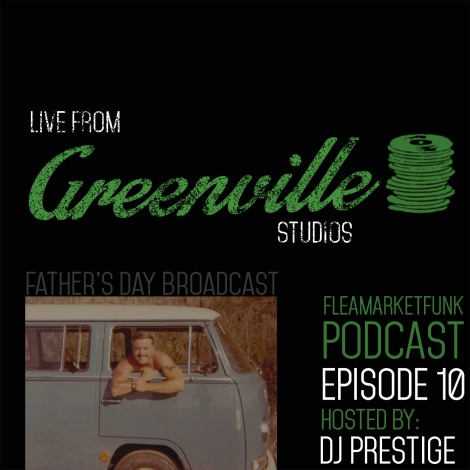 Well, we made it to episode 10 of Live From Greenville Studios. Almost a year ago we relocated, and we promised we would get a radio show going on, and we are excited to keep on keepin’ on. This episode is an all 45 special. Nothing but seven inches for the hour plus show. Not to mention we recorded it on the first day of Summer and Father’s Day. This show is dedicated to my father, who took me from a boy to a man, and showed me what it means to be a father. It’s also dedicated to all you fathers out there who do it and do it well. Sometimes it is a thankless job, but it always pays off in the end. This particular episode we highlight new sides from Grace Love and the True Loves, Chris Hazelton’s Boogaloo 7, Pat van Dyke & Dj Spinna, NYC Trust’s Swing-A-Ling Series, new rocksteady from Queens, NY, with the Frightnrs, new Poets of Rhtym, Jorun Bombay’s edit of JB, plus classic funk tracks from Freda Paine, Moon People, Quincy Jones, We The People and more. There is something for everyone in number ten, including some new digs from the Jersey City Record riot, reissues from our pal Nik Weston, and a whole lot more. Stay cool as you crank up these hot lava rocks wherever you are. As always, if you dig, feel free to donate and also tell a friend.

Listen to the episode on TuneIn.

Can't always be about records! Despite the unusually humid and scorching weather, here we find the Dad in his natural habitat. After a long day of yelling at fish, loud families disturbing him fishing, broken lines, deep cuts from fishing lines and finally catching the biggest smallmouth bass he's ever caught, he returns to his home made fire pit and delivers on the promise of a BBQ in said fire pit. After an hour of attempting to get the fire started, he does what any Dad would do, goes to the nearest supermarket and buys a Duraflame and get this: dry wood. Crisis solved, beer drank, mouths fed. Then he waits four hours until the damn thing goes out.
Rainy morning sounds. Great reissue of "The Call" from @outernationalsounds of this 1978 scorcher from Horace Tapscott Conducting The Pan-Afrikan Peoples Arkestra. 2019
Dellinger & King Tubby: Jah Jah Dub
Early on, some tried to turn me on to Zappa. I remember being a teen and hearing Crew Slut and Yellow Snow and being like, what is this? My buddy was deep into the Mothers and Zappa and my musical palate wasn't ready. Fast forward ..
Oh when the @wax_poetics arrives...Hello Patrice Rushen.
Saturday morning as I sink into a soft pillow of soulful psychedelica.