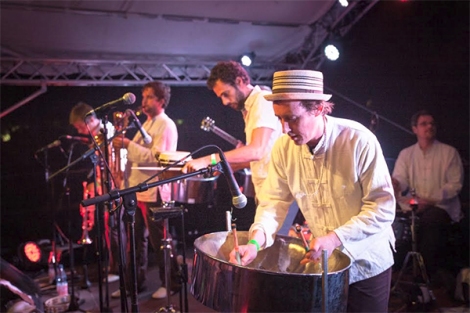 In today’s Reel Talk, we sat down with Björn Wagner of The Mighty Mocambos and Bacao Rhythm & Steel Band. The musician, producer, DJ, vinyl champion, and all around top chap took some time out of his busy schedule to talk about his music career, his various, diverse projects, and one of our favorite subjects, vinyl records. Great insight into an artist we have been following for years through multiple forty fives and full lengths with the Mocambos, now starting another chapter with the BRSB and sharing his love of the steel drum. Please enjoy this exclusive interview.

55 is an incredible record. Can you give us an idea how the idea came about, a record made around the steel drum?

We started out making 45s on Mocambo Records. Since I had brought a tenor pan (steel drum) from Trinidad & Tobago, we started to incorporate the instrument in our funk sound for a new flavour. After a couple of singles, I realised that there is still not enough steel funk out there, so we decided to record more material and write our own songs. Very often, you hear big orchestras with steel pans only, or a lonesome lead player in a jazz setting. What fascinates me is to use the instruments like a horn section in a funk band with a tight, in the pocket rhythm. I am glad you like the result.

Can you speak on your transition musically from Mighty Mocambos to the Bacao Steel Rhythm Band, and how you approached going from group to group?

The Bacao maintains the funk rhythm section of the Mocambos, we just added another family of instruments to create a different, unusual sound. The sheer nature of the steel pan makes you play different music. I wouldn’t cover much with the Mighty Mocambos, as the line-up is similar to many funk bands, so it would be difficult to have a new take on a classic. With a steel band, you can interpret other songs in a totally refreshing way, as the sound allows you to give it a whole new twist. For our own compositions, we realised that you have to be a lot more laid back. The pan is not as sharp and staccato as a horn section, guitar or clavinet. While you can create great layers and pads of sustaining notes and chords by doing the swirls, it’s hard to achieve a precise staccato riff. When you hit it hard, it blurrs and makes almost spring-reverb -type noise, so you have to play differently, which affects the whole way of writing.

How did you hook up with Danny Akalepse and Big Crown Records?

Danny and I got in touch by exchanging records. He had heard of some of our 45s, and of course, I was aware of Truth & Soul. We swapped our catalogues in vinyl form, met when he was over on tour in Europe, did some gigs together and hung out. We had just started recording new material for a potential Bacao album, so we developped the idea of the album together on the road. We started bouncing ideas back and forth. The album you have now in your hands is the result of a very organic process.

There are some terrific covers on the 55 record, Dennis Coffey, Cat Stevens, John Holt, any other covers from those sessions that may see the light of day at some point?

Not sure if I should tell this now, but we have one more song in the box that we saved for an exclusive 45. It’s a hiphop classic…

Can you elaborate on your musical career, how it started and how you got to where you are today?

It started through my parents’ record collection, mostly rock stuff like the Beatles and Stones or Hendrix, which made me want to play guitar in the first place. Then I discovered the originals: blues, early R&B, soul, and I was blown away, so I dug for records and discovered the whole wide world of funk – with the help of hip hop for that matter. I thought I had to learn all kinds of music, like jazz and classical, to be a proper musician, but eventually I found out that I should focus on what I’m good at and what I want to do. Keeping it simple and playing by ear helped me to put it all into action. To go DIY made it all happen, otherwise I would still be listening to people telling me what’s not right. It helped that the Mocambos were never interested in making a hit or going pop, so we would only do the music we like to hear ourselves. In a way, the stubborn consequence of a bunch of nerds has paid off at the end of the day.

I know you’re a vinyl collector, talk a bit about what vinyl records mean to you, and your feelings on its resurgence (although many would argue it never went away).

At first, there was no other means to listen to rare and undiscovered music than through records. Most of the interesting stuff was not on CDs, internet and MP3s did not even exist. That’s how I grew up. If you you wanted to listen to funk, or even wanted to DJ, there was no other option than vinyl. I could go on forever on what I love about records, from sentimental reasons, to sound quality of original pressings which are as close to the source tape as you might get, from to haptics to art. Nowadays, they stand for my personal selection and the way I like to enjoy music. I still find it fascinating how they work.. You can stream the world repertoire for free, but I’d rather play some of my records as I will have a better time. I understand the resurgence, people’s longing for something they can touch and hold in their hand. For someone who had no other choice than having records to enjoy the music, it might appear false to buy records just for the sake of the artwork and for collecting, but so be it. If it helps them to enjoy the music more, let them have fun. On a positive note, I hope it helps to appreciate the album format, which otherwise gets a bit lost in the digital world.

While we’re on the subject of vinyl records, what’s your opinion on Record Store Day?

It started as a really a good thing – to help struggling independent record stores, at a time where even DJs who had been been faithful to vinyl had gone Serato and the big online chains were selling most of the remaining vinyl output. People keep forgetting that it is not “indie label day”, so the criticism of major labels in this context is inappropriate. No one really makes a big income except for the stores themselves as the releases are limited. The nerds don’t like it that now everyone and their mum are buying records, something they had for their own. What I do not like is the forced and promoted “collector’s” thing – people hunting for a Ghostbusters 45 just because it might be valuable and rare when you can buy the original on a flea market for a dollar. Many of the releases are dispensible, but that’s not even a problem of record store day, when you see classic rock albums reissued in deluxe vinyl sets all through the year. I’d say: make some space in the pressing plants for fresh material instead of blocking it by manufacturing the .49c bin records of tomorrow. Small labels complain about capacities, which is a problem – I am blessed that the factory I work with produces faster than ever, as they refused to go with the hype and stick with the ones which were producing records before it was fashion.

Do you have a particularly interesting record digging story?

There were some great moments in countries like Korea, where I had trouble to communicate, and the records were behind the counter, so you had to know what you were looking for. I still managed to find some local funk, by making gestures and dance moves. The funniest thing was in Port Of Spain, Trinidad, where they would not let me in the storage rooms because they were ashamed how dirty they were. It was exactly what I was looking for, but I had to come back a 2nd time and promise to wear clothes I would not need anymore. After all, it was not that bad, but I appreaciated the politeness towards the customer.

Can you talk a bit about the record you just did with E Da Boss, “Turning Point”?

E, what a dude. We met at Groove City in Hamburg as he was spinning at a friend’s party, talked about music, and realised that we were both “fans” of each others music. We loosely said that we should do some stuff together. I recorded a couple of tracks with some friends with no particular intention, showed them to him, and then he and Ishtar killed it on the instrumental of “Turning Point”. It’s funny how things come together: Turning Point was just the working title, and they built the whole story around it. The acoustic guitars were just meant to mock up an orchestra, and the fuzz guitar is just me jamming, looking for a possible horn melody. In the end, we kept it because it was just right. We have more songs in the making…I have brought my brother Steffen in, so look out for some fresh sounds in the near future. I love it how this project develops.

What are you listening to on vinyl these days?

I still find 45s from all regions and genres that amaze me. Steel band records. Plus I have recently developped a faible for well researched compilations of great, obscure music I did not know anything about, outernational rare grooves from all over the place. So much of the US funk has been unearthed, so it’s refreshing to discover new old sounds from the world. Other than that, I can say that I enjoy listening to a good contemporary record from todays’s greats like the Monophonics, Lee Fields or DeRobert. 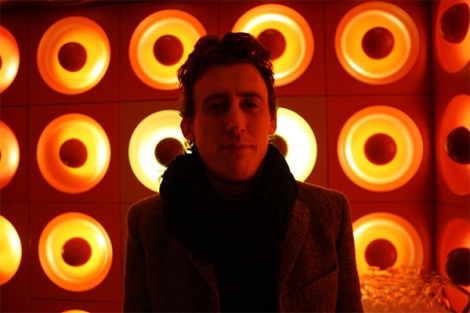 What are your interests outside of making and producing music?

If you take out everything that is art-, literature-, film- and music-related, it leaves us with a good BBQ, an occasional football game and of course, playing firefighter with my 3-year-old son.

Massive thanks for the support, I am feeling blessed. Sending you all love and funk from Hamburg.