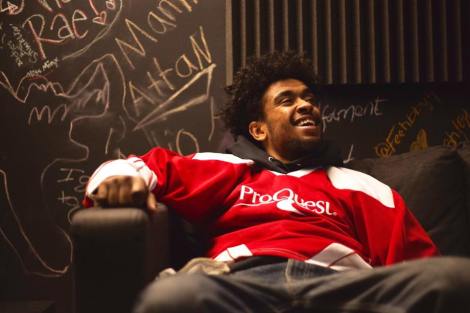 When we first heard K.A.A.N’s track “Music” he did with K-Def, we were impressed. The Maryland emcee proved wise beyond his years. The combination of both emcee and producer, the old guard and the new guard is something we can definitely get behind here at Flea Market Funk. K-Def, a producer who has been active in multiple decades and hip hop movements, paired up with this young gun with the rapid flow is what we would like to see more of these days. It’s not uncommon, but aside from a Preemo with AFRO, we are not feeling much of these kind of collabos lately. Until this. This next track from his debut on Redefinition Records, “Dope”, is of course on some fast flow type ish, with KD lacing the side with some dark beats as if they were out of a horror movie. The track is not dark though. K.A.A.N. bobs and weaves like an Ali rope-a-dope (pun intended) through this one with positive vibes. Bottom line? He’s dope, and with every lyric we hear, it gets better. We gave you the premiere a month ago, now delve deeper into Uncommon Knowledge and more of K.A.A.N.’s accelerated flow. Check out the track “Dope” from the ReDef bandcamp page, and buy the record in all forms (physical and digital) as well. Inject something fresh into your morning java, not a sugar substitute, this cat’s lyrics are sweet enough.

Buy the record out on Redefinition Records here.