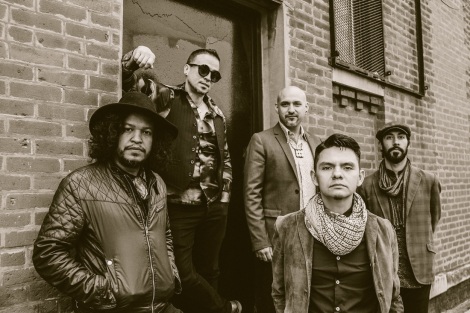 More heat from the kitchen of Electric Cowbell Records, as this burner from Dos Santos Anti-Beat Orchestra has enough gas to get you moving in the sluggish of times. Hailing from Chicago (hey, Cubs win!) this super charged band doesn’t like to be pigeon holed into just one category. In their music you will find a heavy latin influence, but also aspects of psychedelica, cumbia, heavy rock, dub, salsa, and lots of funk and soul. The first track, “Cafeteando!” is a percussive jam if you will, their descarga that goes heavy into dub terrritory while still maintaining a fierce latin beat through out. Horns blaring, timbales, congas, and even more cowbell pepper this spicy pot until the needle hits the last groove. The B-side, is as interesting as the first. “Camino Infernal/Phantom Weight”, treads surf rock territory to start, but washes over into a latin funk jam complete with some psychedelic guitar added in for flavor. The organ is a bonus as well. Your own B side, B Movie, noir film scene for your turntable. Electric Cowbell is known for their wide variety of releases, but no matter what the genre, like JB said: “It’s Got To Be Funky!”. Jim Thompson goes to the ends of the earth to link up with these groups and get them forever captured on vinyl. This record is a shining example of the creativity that comes from the label, and a dash of that hot latin flavor (plus so much more) that your record box sorely needs. Check out both tracks below, and order it from Electric Cowbell as well. When we say you need more Electric Cowbell, we aren’t kidding around. Enjoy.