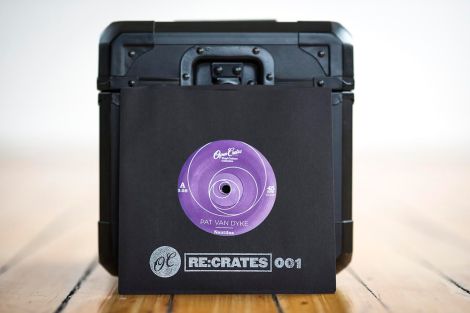 Open Crates is a DJ Collective based out of Jersey City, NJ. They run frequent events with a variety of crate diggers, DJs, and producers that is second to none in this area. They have expanded to Brooklyn, done some great event collaborations with the North Side Festival in Brooklyn, and promote vinyl records and DJ culture to the fullest on the daily. Each member of OC is a talented DJ, producer, and musician in their own right. Whether it’s a guy like Mr. Len formerly of Company Flow, legendary record slinger/ producer Big Jack, DJ ACL, and many more, these cats are serious about promoting vinyl records and the very special music they dig for. So much, that Open Crates have started their own record label and seven inch record series called RECrates.

RECrates kicks off its series of remakes and interpretations with drummer/ bandleader Pat Van Dyke. No stranger to vintage synths, live instrumentation, and hip hop arrangements, Van Dyke takes the classic from Bob James and plays homage to it in his own way, respectful and funky. PVD is known for putting together a great bunch of performers, whether it is live or in the studio, and on this record it’s no different. With Pat Van Dykeon Production, Drums & Sequencing, David Stolarz on Keys,
Josh David on Bass, and DJ MentPlus on the Cuts, this track is a great interpretation for sure. The flip is a Bee Gees cover, “Love You Inside and Out” and features Melinda Camille on vocals. A great start to what we hope will be a long and fruitful series of 45s from this collective. Listen to the record below:

Check out the world premiere of the video as well: