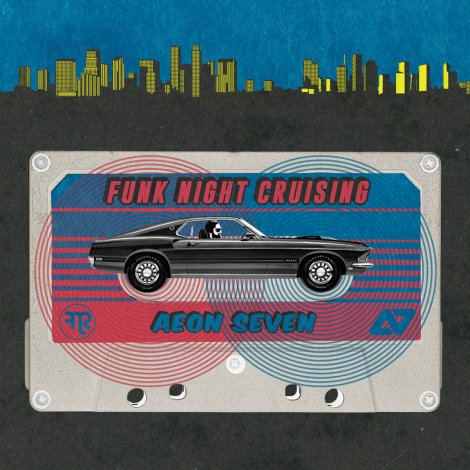 French DJ, turntablist, and producer Aeon Seven is always involved in some interesting projects, so it’s fitting that he release this limited edition mix tape (on cassette no less) of one of the most innovative funk and soul labels out there: Funk Night Records. Made strictly from forty fives from the Funk Night Records catalog, Aeon Seven proceeds to destroy and conquer the music on wax. Precise cutting and stealth mixing propel this one of a kind mix to higher levels as the music used is just as one of a kind as the mix is. Funk Night’s roster is legendary, and we are excited that an artist like Aeon Seven chose to highlight the tremendous back catalog of this label for the mix.

For those of you who are in the know, and those who are just finding out about Funk Night, they are one of the premiere funk and soul labels in the world. Whether it’s home grown Detroit talent, Russian funk, or heavy organ soundtrack funk from Estonia, they have planted their flag firmly in the ground. Their sound, and the label has solidified them and their records as high demand in the present day. This is a label that you will look back to in fifteen, twenty years and say, man I should have copped back then. This mix proves it.

Video for Side A of Funk Night Cruising

Get the limited edition cassette here.

This one I have never found in the field. However, since records come to you, the time to get it was yesterday. Shout out to @rocketnumber9records for yesterday's dusty excursion.
Happy 45 Friday!
AJ & Jiggawatts: Wrong Step. First release on the new Money Mou$e label is a scorcher!
This was a surprise. Thx to @stereophonk for the latest release from True Flavas Band. A stone cold groove from the best of avant-garde players from St. Petersburg, Russia, you can hear the record on FleaMarketFunk.com
The $1 bins were calling today.
Happy 45 Friday!