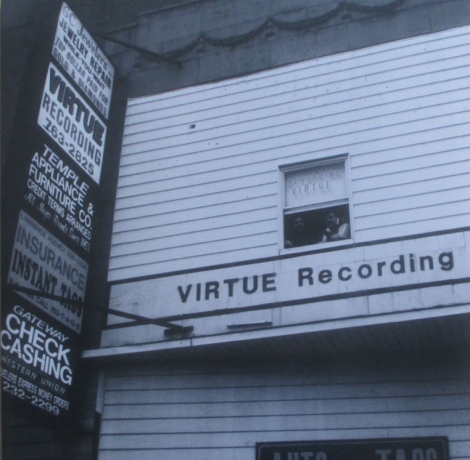 One of the most well known and beloved recording studios in Philadelphia, PA music history, Frank Virtue’s Virtue Recording Studios has seen its share of magic. From number three Billboard hits with his band The Virtues to the eventual opening of the studio in 1962, the man made a name for himself making good records. From the big bands of the 1940’s up until the hip hop of the 1990’s, Virtue Recording Studios has produced some phenomenal records in its time. The flat fee of $300-$500, which included the recording of two songs plus a 45 pressed on either their own label or the Virtue house label, produced many classic (and hard to get) records. Sides like Cliff Nobles “The Horse” and “Boogaloo Down Broadway” by the Fantastic Johnny C, plus a myriad of soul, rock, and funky sides, (“Big Ladies Man” one of our favorites) got the Virtue treatment and resulting sound. This lo-fi sound on the records were highly sought after by record collectors and champions of this sound out of The City of Brotherly Love. The studio ran until the 1990’s where a number of rap groups recorded records there. Virtue passed away in 1994, and the studio was sold. Unfortunately, after a few years it went out of business, and the historic building at 1618 North Broad Street was bought by Temple University and razed in 2001. A huge chunk of Philadelphia music history went down when that building was demolished. There are no historical markers to show that the studio even existed, only the remaining acetates and incredible music made there through out the years. To honor this sacred place and the music that came out of it, Tramp Records has put together a double gatefold vinyl LP with detailed liner notes, unseen photographs, and a full download code to take on your travels. Many of the songs are legitimately licensed for the first time, so this is another great reason to back the project. Check out a sample of each of the song’s below: