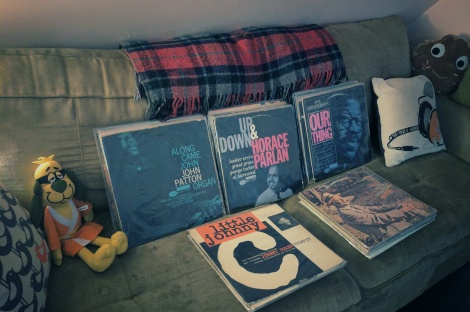 We have said previously that you don’t find records, records find you. We stand by that statement wholeheartedly. Recently, records have been finding us, and it’s with a personal story. You see, every record has a story. From the artist who made it, recorded it, to the company that pressed it and put it out, to the eventual chain of people who owned it. The end result is hopefully resting peacefully in your hands, ready to be spun on your turntable. A life span that has a story that touches each an every person who’s hands and ears are tied to the particular piece of vinyl. Here’s some food for thought on the personal story of each record and chasing that white whale while digging.

When I first started digging way back when at the fleas and yard sales, I always had a scenario in my head: I’m going to roll up on some older man or woman’s table, who was a Blue Note and jazz nut, and find all the classic Blue Note and jazz records I always dreamed about. That translated into looking for a white whale like Ahab. Where I dug, it wasn’t a city, but there were urban areas and the mixed amount of people who sold records (beat up at best), usually had me finding late Teddy Pendergrass or The Manhattans releases that kept me frustrated but optimistic. That was at least twenty years ago. I can count on one hand the times I actually came up to a table and found a cache of original jazz records, and honestly, they were playable at best. There were odd times when I ended up finding a Lou Donaldson baking in the sun w/out an inner sleeve, or the empty Grant Green jacket, but finding whole collection of great jazz records in the field (although I have small amounts scored at times) is a rarity. That changed a few weeks ago, and the personal story of the records couldn’t have been better.

Two minutes before you walked up on that first day, my daughter had told me this: You need to find a DJ, someone who loves this music and respects the history to buy these records. You were the next person that walked up. I know my husband’s records are in good hands.

Like I said earlier, I was always searching for that white whale. Walking up on a table that had a grandma and grandpa who wanted to sell their collection. It rarely happened, but as I was out n the 90+ degree heat, I’d stumble upon a seller and her records that would find me, and eventually help me get closer to that white whale I have been chasing for decades. I didn’t go early like I usually do, but it was later on in the afternoon, the sun was high, and my only purchase was a stuffed Hong Kong Fooey doll. I’d given up on the heat and the records. Separated from my wife and kids by an ice cream stop over, I decided to press on. There it was. A table with three boxes that said: Jazz, R & B, Latin. The jazz had a Miles Davis in the front. I immediately started digging and pulling records. Original Blue Note High Fidelity pressings, Latin records like Chollo Rivera and the Soul Drivers, even some deep funk Lps. This table had some heat. No one was even looking at these records. Dream scenario. As I was making the final transaction, I heard the story that these records were Miss R’s late husband’s, and he was a huge jazz head. Miss R was not playing, she wasn’t letting these things go for cheap, and I heard the whole back story of each of these records. A personal story. From Philly to Newark, NJ to their eventual resting place in West Jersey at her daughter’s house. I bought a dozen records and exchanged info, she said she would be at a certain place the following week. I agreed to meet at 8:00 am. Even though I DJed until 3am, I had to get up and get these. There wouldn’t be another chance. So I did. I bought another dozen records, and had to turn down some very heavy records that started at $150 and $200. I got to hear even more stories about her late husband, how he loved Latin music so much they called him ‘Papi’, and that she wanted more for them because they were sentimental. It tugged on my heart strings, seriously, and I bought these mint boogaloo and Cal Tjader’s I didn’t have not just because I wanted them, but because of their story. I made an appointment to see the rest of the collection. The following week I caught a flu bug (thanks kids), but determined to get to these records, took a chance of quite honestly, shitting my pants on the ride to these records. I did not care. Records needed to be bought and rescued. White Whale be damned, I am getting these jazz records. Arriving safely, I found Miss R all set up with an umbrella and some cool drinks on the side of the house. The remainder of the collection for me to go through. I didn’t stay too long, but went through them thoroughly and got an entire flight case of VG+ to NM jazz heaters. The circle was just about complete, they had yet to hit my turntable. Her personal stories and the connection I felt with those stories made the transaction even sweeter. I told her that this was a dream scenario for me, but never happened. She said: “Two minutes before you walked up on that first day, my daughter had told me this: You need to find a DJ, someone who loves this music and respects the history to buy these records. You were the next person that walked up. I know my husband’s records are in good hands.” This will never happen again in my lifetime. The most personal story of every one of these jazz records has been told.