Behind The Beat a book from 2005 that featured an intimate look into the studios of some of the most well known (and then unknown) producers such as Dilla, DJ Premier, DJ Shadow, and Mario Caldato, Jr., among others, is most definitely one of the must have books for music fans. Now on its sixth pressing from Gingko Press, it is a staple on bookshelves and bed side tables of many producers, DJs, gear geeks and other supporters of hip hop and sample based music. What took some years to create by photographer, hip hop fan, and food truck impresario Raph Rashid is about to happen again. Back To The Lab, a further exploration into inner sanctums and producer’s most personal spaces. This one goes in even deeper folks, and the world is a better place for it. Check out some shots from the book itself:

Back To The Lab will feature twenty eight artists and producers and features over 300 photos of studio/ work spaces from the likes of Flying Lotus, Jazzy Jeff, Kenny Dope, El-P, Oddisee, DJ Format, Diamond D, and more. With an updated roster that we all can agree is never really complete as new iconic producers emerge in the 12 years since the first book was published, this book definitely picks up where the first left off and then some. What’s great about the book is that it has a bastion of different styles. Whether it’s hip hop, or soul, or house music, each artist or producer has a certain way they go about getting their sound, and these intimate photos of the places where they spend the most time is not just fascinating, but inspiring as well. They all draw inspiration from their surroundings while furthering their craft, and the people who read this book will feel inspired as well. 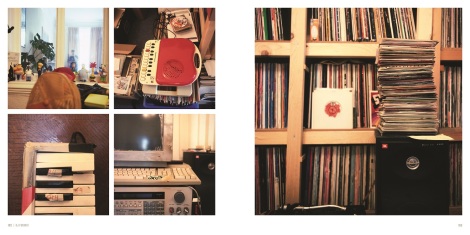 For those who are in the biz, have their own inner sanctum where they go to be creative, a book like this is a great look into heroes, peers, and fellow creatives work spaces. For those who this is new to, you’ll get to see a whole new world. What may look like just junk or a messy room in some cases is carefully controlled chaos heavily in tune with the art they create. 12 years later and this is an exciting time for a book like this. Available through Rappcats on October 13th.