Record Safari, a feature length documentary “exploring the restored love, appreciation and consumer demand for vinyl records in the age of the digital revolution”. Following Alex Rodriguez road tripping across the States, the film chronicles Alex as he curates vinyl discoveries and finds for the Coachella Festival on-site record store. Throughout the journey, he will stop in different cities across America to meet his fellow collectors and vinyl junkies that include record store owners, and producers to share their passion for the black crack, its warm, analog sound, and that favorite sound of the needle to the groove.

This morning, director Vincent Vittorio, host Alex Rodriguez and crew showed up at The Greenville Studios and did and interview with me for the film. Vittorio has directed documentaries such as Nerd Prom, After Spring, One Day In April, After The End, Warehoused, and more. Rodriguez has been dealing vinyl for quite sometime, owns Glass House Records, and has curated record stores for Coachella and FYF among others. Serious record dude and director. We spoke on vinyl records, Flea Market Funk, and vinyl record culture among many other things. The project, based out of Los Angeles has been traveling across America, hitting cities large and small, and will finish up at The Austin, TX Record Show. The documentary will feature some interesting people, so we are definitely looking forward to seeing the final product. It will be released early 2018. Here are a few snap shots of the session. 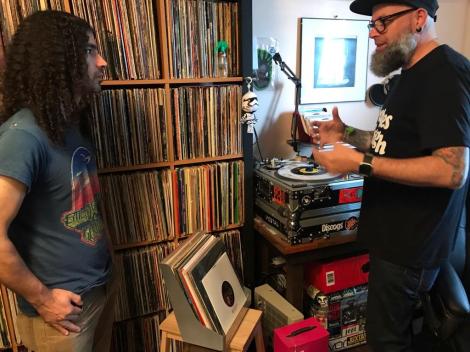 Check out more info on the documentary here.

A good start here at @telegraphnl in New London, CT. Dope shop with a great selection of old and new records. Stop by and support this local, long running staple of the NL music scene.
Oooh they did it again!
Well done @momanisthetakeover on this latest 'zine + mix project Nigeria Nicer:1980-1991. Featured today on Flea Market Funk.
Salvator Dragatto: Mind On Madrid
Thanks to the good people at @bigcrownrecords for asking me to pick August's BCR 10s. A small grip of records I am feeling at the moment in no particular order.
Happy #45Friday
If there has been one dance record that I regretted not buying back in the day for $7.99 from Pulse Records in Red Bank, NJ (shout out to Mark Bee, Glenn Garcia + Jah-red) it was this one. The roulette wheel on the cover that drew you in and when you needle dropped it, you did it again and again. Let's not forget the Chaka Khan sample. If you were looking for the 45 on Virgin, it's jumped to over two bills easily. Imagine my surprise to see a new 12" cut from the original masters with an etched roulette wheel, a nod to Roulé 305 on the B.
Slightly obsessed with this reggae cover of Underworld's "Born Slippy" from Sokabe Keiichi & Inokasira Rangers on @parktonerecords