Another year down and another year of great funky 45s. There are so many funky 45s that come out during the year that we enjoy sharing with the Flea Market Funk family. We understand the blood, sweat, and tears that goes into each seven inch, and we wish we could just pick them all. It’s always tough to narrow it down, but here are ten records (in no particular order) that graced the pages and screens of Flea Market Funk for this past year. Thanks for taking another ride with us in 2017.
Enjoy!

This very limited forty five came out of the M-Tet camp in the Bay Area. Both sides are soul jazz with a funky theme throughout, but “Gavel Srike” is indeed the funkier of the two. Not one but two winners here kids. Not sure if it is still available, but if it is it won’t be for long.

From their second release Greasy Listening, J-Zone and Pablo Martin TEAR it up once again. If you thought their first release was gritty like food when you’re on tour, then you are in for another treat with “Bite It”. This is how funk music should be made in 2017, and for that matter, at any time. Look for more J-Zone treats upcoming.

Funk Night’s Misha Panfilov strikes once again with some heavy funk and cinematic grooves out of the woods, literally, the grooves on both sides are hard not to applaud. Funk Night proving once again that they have their finger on the pulse of funk coming from the four corners of the world. Don’t sleep on the artist or the label. Well done once again.

This scorcher from Brazil masters João Donato e Donatinho was indeed one of the best of 2017. Full of energy, synths, and a great boogie vibe, by now you’ll be hard pressed to find this forty five on the cheap. It sold out very quickly, but its impact is still large six months later. Bravo! NYC Trust.

What a burner from Adam Scone and company as they put their sound on the map and in the hands of many forty five enthusiasts throughout the globe. With an all star cast of players as well as a dope b-side, welcome to the best of 2017 Scone Cash Players!

Rocafort Records come through once again in a pinch with this high energy, organ filled jammy jam from Phat Fred. Just what the doctor ordered. They say an apple a day keeps the doctor away. We say some sweet apple pie like Phat Fred are laying down won’t hurt you either. File under house rocker, King Curtis sounds, or ass shaking grooves. A great side indeed.

More straight fire from the Midwest and the multi-talented Leroi Conroy, who doesn’t just make dope records for Colemine Records, he produces, and is in charge of art direction on many of their releases. A man after our own heart. This one is so nice that you’ll need doubles so you can cut that drum break for days.

Social Lovers: Drop Me A Line

Out of the ashes of Cherries Records come Potions Records. NYC bred, Queens is the borough, and this record is funky. More funky on the modern funk and soul/ disco tip, we were most definitely impressed with this low key release. It’s got a lot of spins here and abroad. In fact, it’s been a late night sleeper record for crowds to move to. Dig. 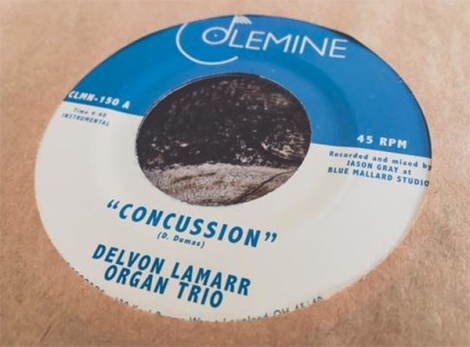 Seattle’s Delvon Lamarr Trio rip it up on their debut seven inch for Colemine Records. Heavy on the organ and funky like your grandpa’s drawers, this soul jazz outfit knows how to get funky with a capital F. Look for more treats in ’18 from these up and coming jazz funk stars.

We told you to keep your ears out for J-Zone! The man is busy, and when he’s not part of the Du-Rites, playing drums in a myriad of bands, remixing Wu-Tang, or interviewing classic drummers, he’s playing drums in the highly applauded classic band Manzel. They returned with a new single as the year came to an end and it is a burner. We are looking forward to seeing if they have more funk magic up their sleeve.