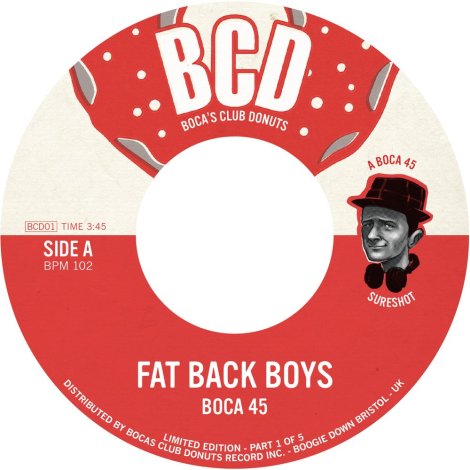 Over time we have seen Scott Hendy aka Boca 45 churn out DJ set after DJ set of heat. His discography is a journey through the roots of hip hop and a funky lesson that we all need to study. Moving through hand crafted beats, a mature B-Boy’s attitude, and a hip hop mind set, he has been able to put out a body of work that has stood out year after year. Whether funk, break beat, broken beat, big beat, hip hop, funk, soul on top, down tempo, nu jazz, and beyond, he’s been able to position himself at the forefront with each limited release. Working with some of the best names in the business, we have found ourselves waiting for each new release (and wondering if we could ever get some of those really early 7″ gems back in print again). His latest release is “Boca’s Club Donuts Part 1”, an all vinyl only project that lives up to those block rocking beats, on point live sets he throws down, and the limited mixes that have been popping up only to sell out quickly. This two sides of heat was pressed in a super limited quantity of 300 pieces and is hand stamped and numbered. This is only available on 45. Akin to his live DJ sets, the whole vibe of this release is funky and very DJ friendly tracks both under four minutes on each side. “Fat Back Boys” is filled with, you guessed it, plenty of fat back and is a soulful party starter if we ever have heard one, while the flip, “Les Beats” has four lads from Liverpool meeting three lads from NYC helping put together a bonafide B-Boy classic in the making. If you are new to the Boca 45 sound, this is definitely a great introduction to the party. If you’re familiar with what he has thrown down in the past, then get ready to pack your record box with more heat from the Bristol based scientist of sound, mathematically throwing it down with ease on this one. Check out a sample of the tracks below: