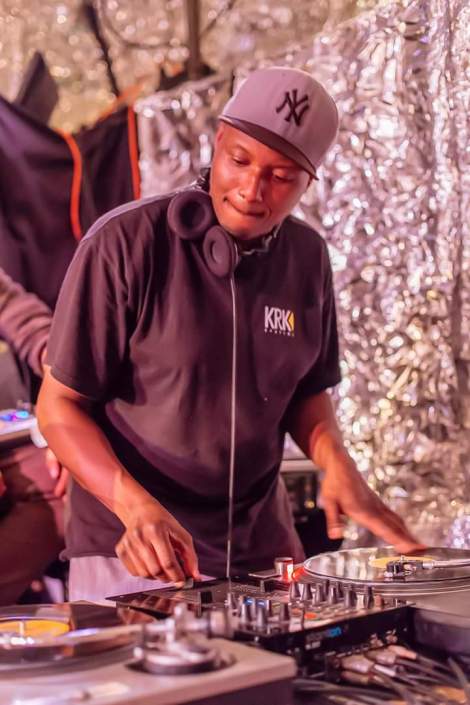 Favorite Records at the Moment:
Hmmm. That always changes at any given time depending on the vibe. One of my picks I’m truly digging is the Mike Maurro Remix of “Could It Be I’m Falling In Love” by the Spinners (one of my favorite Soul groups ever.). The original was already easily one of my top five soul classics, but Mike sweetened it even more with his re-edit/remix by having the instrumental track play in certain spots, and also spotlighting Philippe Wynne’s additional vocals from the session. This record I never get tired of hearing. It would’ve been nice if it had a vinyl release on 12” or something.

Lately another gem I’ve been also loving is “My Mood” by MFSB which I just got a hold of on vinyl recently. And “Groovy People” by Lou Rawls which is a childhood favorite. You can’t go wrong with that Philly Soul. Yes sir.

Best Digging Story:
There were a few. From digging at a record fair at midnight in Brooklyn, to buying almost 70 albums at 50 cents each at a book and record fair at my local library and carrying them all home in plastic garbage bags and a raggedy backpack. Haha. I even scored some 45s just walking through my neighborhood once and just talking to a dude with records in his hand. I have to really think about this one, I had a few good moments.

Favorite Mix and Why. Any Genre, Any DJ:
I would say Soundbombing II by J-Rocc & Babu. Even though it’s an album, it’s basically a Rawkus Records mixtape. I’ve stayed playing that cassette on repeat for a long time especially on the go. So much so that the words have rubbed off on my copy. Haha. The execution of that mix is so spot on. Technically sharp with the cuts and scratches, but also skillful with the transitions to give it a nice vibe you can rock with. Plus the choice of records used and how they were placed among each other worked really well.

LP, 12”, or 7” format?
All three. It doesn’t matter as long as it’s good and worth keeping in my collection. Although I’ve been buying 45s a lot more in the past few years, I definitely still collect albums and 12” singles mostly to fill the holes in my archive of records I missed out on the first time around. And to even catch stuff I DIDN’T know about. It’s a never-ending search. Hehehe.

Junk Food You Can’t Live Without:
Cookies!! Especially oatmeal raisin. But I would go with the butter brunch and chocolate chip too. Whatever the flavor I’m there. You can say I’m the “Cookie Monster” Hahaha.

Most Memorable Gig Played:
The one that definitely sticks out in my mind was when our crew the Buck 50 Kutter DJs did a performance at Legion in Williamsburg, Brooklyn – NYC in February of 2010. It was a release party for Rob Swift’s album “The Architect” which came out at the time and he had us come out to rock out with him. Not only did we share the bill with him, but he also had Mista Sinista, Total Eclipse, & DJ Precision as well which was awesomely dope. Plus Breez Evahflowin & Kid Lucky performed too. The crazy thing about it was that it was during a snowstorm and the place was PACKED!! They came out and supported which was so dope. It was an awesomely great show and a lot of fun. And our performance was included in Rob’s DVD that came out not too long after. Plus we did a mixtape for Breez too. A lot of good came out of that show which was a blessing.

Record That Never Leaves Your Record Box:
“Intimate Connection” b/w “Tonight” by Kleeer . That 45 is one of my go-to records I love to play out, double up on and cut up. BOTH SIDES. Smooth and funky and good to groove on. Those doubles I found together at the thrift shop years ago, and they have now became a staple in my box. And it just got reissued recently too.

Shout Outs, Last Remarks, and Gig Info:
As far as gigs… there’s a possibility of something or two in the works. God willing there will be more to come.

To my parents (miss you Dad..Rest In Paradise) My brothers Adrian & Brett and my sister Carla.

To my Buck 50 Kutter DJ brothers: D. Official & Dope-Man. What up? Also shouts to my second crew, First Life: made up of Lateef Dameer (my long time friend for almost twenty years) on the MPC, Adam Lomeo on guitar & Hendii our vocalist. Love you guys.

Shouts to…45 Bandits, United Vinyl Diggers Federation, Mobile Mondays, Iris Records, Rock & Soul, A1 Records, and everyone else who showed me love and support in one form of another, and everyone out there keeping the DJ & digging culture alive. And definite shouts to DJ Prestige, thanks for the love. Peace Respect. God Bless & Rock On.