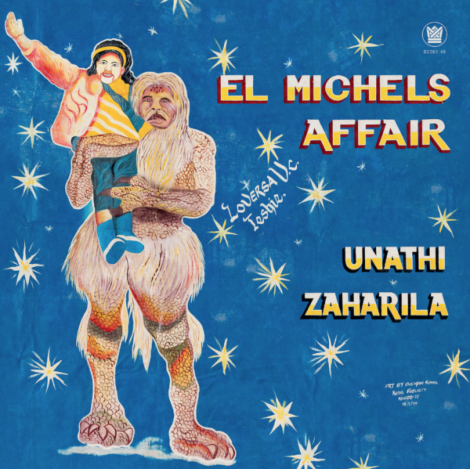 If you’ve been following the career of El Michels Affair, then you know how deep the outfit is as musicians. Whether it is releasing scorching funk and soul on the original tip, putting out blazing covers of classics, or backing the Wu Tang Clan, EMA is a force to be reckoned with. Keeping in line with the sonic sound they are known for and simultaneously breaking new ground on the side as well, the El Michels Affair release a Bollywood funk forty five that takes you on a journey. If you weren’t expecting this, you’d be on par. Pulling in 79.5’s Piya Malik on vocals, “Unathi” could have been recorded in the hey day of Bollywood funk. It’s got all the right ingredients that start with Malik’s sultry voice and progress through psychedelic arrangements and a non stop rhythm. This is El Michels Affair flexing their musical chops in a big way. The flip is a soundtrack cut to a movie that doesn’t exist, yet. “Zahiarila” explores the gossip that goes along with love, and that vitriol spewed that can tear it down. Both sides of this record are fantastic, and while we love the heavy funk they’ve been laying down for decades, this progression just elevates the band as one of the greatest to do it. If you don’t progress as a band you just get stale, and there is nothing stale about this release. Have a listen to “Unathi” and feel what they are laying down. Out on June 15th, this double bagger of heat features artwork from Chicago’s Deadly Prey Gallery, which is a bonus to say the least.

Shout out to @permanentrecordsla for hooking a brother up with this want list Lp. McDonald and Giles on Cotillion Records from '71. This is a Canadian pressing (purple label) and just stoked to get spicy dibs on this one.
Paired this @fourtetkieran #madvillain remixes with Romain Paire Eclipse 19 classic Pet Nat from Domaine des Pothiers. A little sweetness on a Monday night. Strawberry and apple cider notes, this one is delicious. Shout out to @willow_and_post for this Summer recommendation and @rocketnumber9records for this @stonesthrow classic.
Shout out @jagel, the MM..Marginalia print has come in. Will look good among all the other art in here! Thanks.
Was waiting for the follow up LP, and boom, it comes in the mail. The @bacaorsb nail this one once again. Out on Friday on @bigcrownrecords so scoop the damn thing up, you won't regret it.
Giving you an idea of what kind of flavors @monk_uno and I will be bringing on 7.10.21 at the return of #Shake ! in #Brooklyn at @friendsandloversbk . It's been a minute since we rocked with you. #thebestfuckingsoundaround is back and at this all vinyl affair it's about freedom. it's about being you in a safe space with like minded people who enjoy good music
On the Thorens tonight: