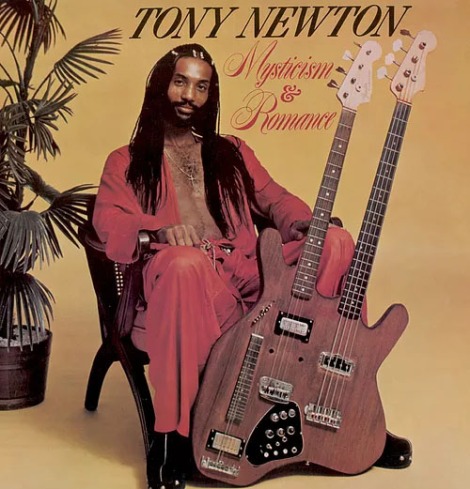 Tidal Waves Music has another treat for the heads out there, and this time it’s Tony Newton’s first solo record from 1978, Mysticism & Romance. Backing it up a bit, Newton, a Detroit native and multi-instrumentalist played with legends like John Lee Hooker and Smokey Robinson from an early age, and would go on to become the musical director for the Miracles. In his career he has recorded and toured with artists like Marvin Gaye, Stevie Wonder, The Supremes, and the J5 among others, even earning the nickname “the Baby Funk Brother” (If you’re following your history, you know that that’s a huge deal.) Newton has played on countless Motown classics, but has also been all over records on the Stax, Invictus, and Hot Wax labels too. He would also go on to be a member of the jazz rock fusion band The New Tony Williams Lifetime (commanded by Miles Davis drummer Tony Williams) and with Gary Moore in the British rock band G-Force. So with a solid CV and a solid career as a musician, his first solo record combined his trademark bass playing with an all star cast of sorts, laying down cosmic funk and jazz rock vibrations throughout the Lp. Newton plays along side Sylvester Rivers (Aretha Franklin) and Alan Pasqua (Quincy Jones) on piano/ synths, Charles Ferring (Barry White) and Ray Parker Jr. on guitars, and Danny Spanos (Sly and the Family Stone) on drums. A pretty stellar cast of players if you ask us, who bring more than enough to the table. Tidal Waves is reissuing this for the first time ever since its 1978 release on deluxe 180g vinyl, remastered by Tony Newton with exclusive liner notes and obi strip, and a limited edition of 500 globally. There will also be 100 exclusive blue vinyl available through Bull Moose as well. If you have not heard this epic record, here’s a chance to listen to it below, and own the official reissue from Tidal Waves as well.