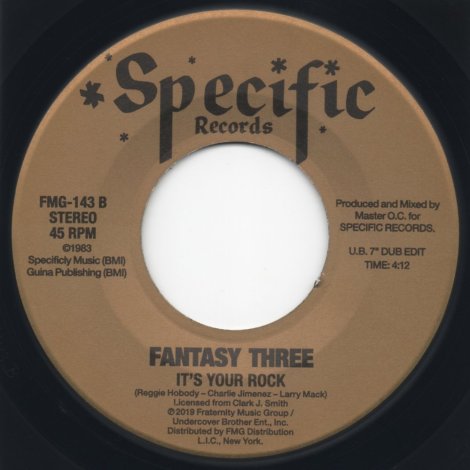 Easing into the weekend like “Discooooo……” and we are loving it. Today’s goodness comes from the ever reliable Fraternity Music Group. This time they’ve struck early rap gold with one of our old time faves from The Fantasy Three. “It’s Your Rock”, from the Harlem three pack of Charlie Rock, Larry B, and Silver Fox is one of the hardest records of its time. It’s not just the A, but the dub side, mixed by Aldo Martin the electro hip hop genius that is also a huge attraction to this tune. On point and still knocking to this very day, it’s been a favorite of DJs all over the world since it was released. This is an officially licensed, first time pressed on a seven inch reissue from Specific Records. It contains a special edit by the Undercover Brother. Housed in a throwback Specific Records jacket, it has been issued as an extra loud pressing, so DJs can get the party rocking (as if this record wouldn’t anyway!). Fraternity Music Group is not just putting out any old music on a record, they’re serving up a history lesson, and this record is mandatory NYC rap history. If you don’t know, now you know. Fraternity is not playing around with this. It’s your rock people. The beat is so hot, it makes the popcorn pop. That’s just the way it is. Necessary music for early NYC rap fans. You don’t believe it? Ask De La Soul, Method Man, Raekwon, Ghostface, and Jurassic 5 who sampled this classic and made their new joints that much better. Check out the original record below, and buy the 2019 Fraternity pressing after.