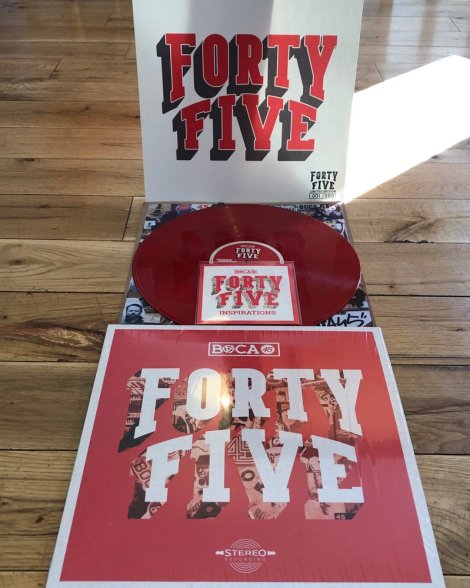 The funky music machine known as Boca 45 has got a new release. This time, it’s a long player, not a 45, but entitled Forty Five. Got that? It’s an entire album that documents his forty five years on earth musically. It’s packed full of collaborations with notables such as DJ Woody, Geoff Barrow, Billy Fuller, Ben Salisbury, Louis Baker, Emskee, Sergio Pizzorno from Kasabian, and Gee Ealey. It’s a personal touch from the artist, who wrote the very comprehensive liner notes, detailing each track, etc. and had his teenage twin sons design the album cover sleeve as well. All Boca 45s on deck for this release! It will be out on Mass Appeal (Nas, Run The Jewels, DJ Shadow) in July, however, he’ll be selling 300 limited edition pieces in advance to folks who have supported Boca in the past and bought his long list of vinyl goodies directly from him. This one is also on red wax and hand numbered, different than the black wax from Mass Appeal in a few months. Here’s some other details about the record:

He’s also got some dope shirts too, so do not sleep if you dig the forty five style!

Get the package here.