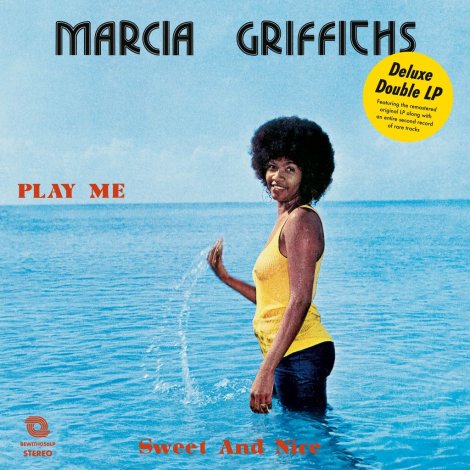 There are a lot of records being reissued these days. So I was definitely surprised when I saw that the debut solo record from Marcia Griffiths was getting the deluxe treatment from Be With Records. Sweet And Nice came to us in 1974, and Griffiths was out on her own after leaving the duo of Bob & Marcia, who were top of the pile with a track like “Young, Gifted, and Black”. She had not yet formed the I-Thress with Judy Mowatt and Rita Marley. This solo efforts a fantastic soul filled Jamaican record. She is silky smooth through the whole album, this is a must for not just reggae lovers, but all who dig music all together. The record itself has been reissued at different times with different titles and running orders, most notably by Trojan in 20016. However, Be With is not messing around, and they have put this thing together back as it was originally presented and with it’s original title Sweet And Nice. Featuring the sought after “Here I Am (Come And Take Me)”, a neck snapper of a tune, plus “Everything I Own”, Green Grasshopper, and her cover of Neil Diamond’s “Play Me” and Curtis Mayfield’s “Gypsy Man”, this 45 year old record stands the test of time. The bonus record is fourteen extra tracks that include “Melody Life”, “Mark My Word”, and “Band of Gold” among others. Alternate takes of “Play Me” (with producer Lloyd Charmers lending his vocals) as well as “The First Cut Is The Deepest”. Remastered to sound even more sweeter and nicer, we think Be With really has done this classic Jamaican record justice. Check out Marcia at her silkiest below:

Pre-order the record here from Be With Records.