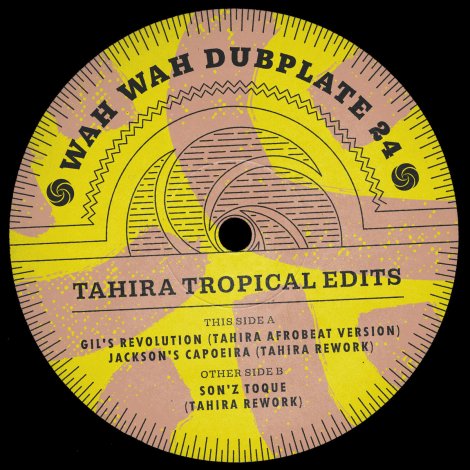 So nice that they had to press it twice. If you missed this monster of a record the first time, it’s now your time to grab it, put it on your turntable, and make people dance (and do some slick dance moves yourself!). São Paulo based DJ, producer and crate digger DJ Tahira stepped up to the plate with this twelve inch and hit it out of the park. Released on the Wah Wah 45s label, we are happy to see it get another pressing, as it’s quite the rework. We thought it was gone forever, but really, a record like this needs to be repressed again for the crowds of people who could not get their hands on this hot hot heat the first time. With three superb tracks that will no doubt have you moving in your seat, Tahira knew what the people wanted on this. The anchor track is “Gil’s Revolution (Tahira Afrobeat Version)”, a tropical take on one of the meanest tracks by Gil Scott-Heron, “The Revolution Will Not Be Televised”. Reworked in an afrobeat style, the organ and bass are so damn deep, you almost forget it was recorded in 1974 and then reworked by Tahira in 2018. A scorcher by itself, an afro take on it is pretty damn tough. The next track, which is equally hot is a take on Jackson do Pandeir’s “Capoeira Mata Um” entitled “Jackson’s Capoeira (Tahira Rework)”. It takes us right to the heart of beautiful Brazilian music, and is perfect in every way. The third and final track on this 12″, “Son’z Toque (Tahira Rework)” completes the trifecta of dope relicks on this record that will soon be gone again. Listen below: