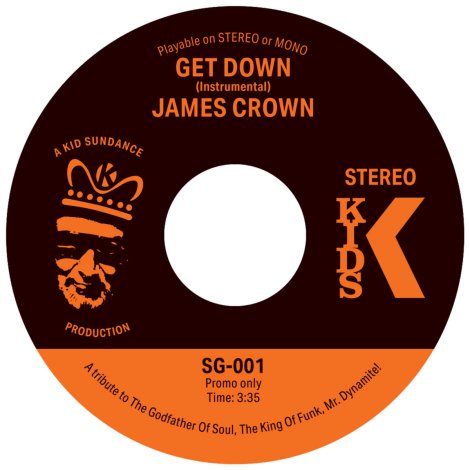 We have to let you in on a little secret here at Flea Market Funk. We love James Brown. Now before you go all, but he chased people with a shotgun, did cocaine, was a control freak, went on CNN drunk, and was a horrible person, etc., let’s just stop for a second. Yes, he did have some flaws. However, he created funk. Without sampling him, there might have been no hip hop. Should we go on? Well, we will go on, because this latest collaboration release from Rucksack Records, Dutch Gems & Kid Sundance’s Fair Deal Records is quite the chestnut.

James Brown gave us a direction in hip-hop through his records,” The fact that he has so many recordings plus the fact that those records weren’t very obscure, gave everybody who owned a sampler and a turntable a chance to get down. Therefore the records I used for this tribute track are by no means obscure JB records.

“Get Down” by James Crown sees Dutch Kid producer Sundance chopping guitars, drums, and bass on the SP-1200 and the ASR-10. Playing these chopped up sounds like instruments he used a combination of samples rather than complete hooks to put this entire track together. He also added cuts and some vocals to the track after some time to gives us the finished product of one of the finer JB tributes we have heard in quite a while. This record (vinyl only) will be limited to 300 pieces worldwide via bandcamp and selected record stores throughout the globe.