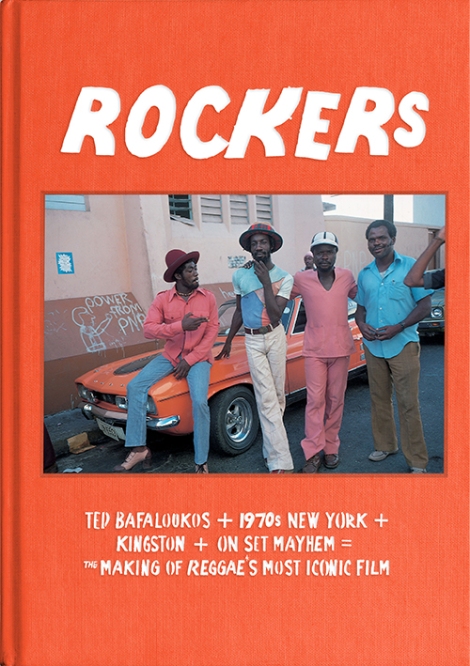 For those of you who loved the seminal 1978 cult reggae film Rockers, you are now in for a treat. Gingko Press will be releasing a 320 page, 9″ x 12″ hardcover book with over 300 incredible color and black and white photos from filmmaker/ photographer Ted Bafaloukos (weighing in over four pounds!) that details the inspiration and making of the film itself. With a never before published autobiography and journey of the filmmaker Bafaloukos as well as an exploration of the 1970’s Jamaica/ New York City connection, it’s a documented piece that any reggae lover will cherish. Ted Bafaloukos was a Greek immigrant who moved to NYC, eventually brushing up against people like the Velvet Underground, Jessica Lange, Philippe “Man on Wire” Petit, and Robert Frank, among others. He fell in love with reggae music, as Jamaican culture was a very underground piece of New York City. These times enjoying reggae in NYC would eventually lead him to Jamaica and making the movie Rockers, which we all know is a classic beyond anything. The movie itself paints a crystal clear picture of the ’70s Jamaican style, the culture, and of course the music. Featuring legendary reggae stars such as Jack Ruby, Big Youth, Horsemouth, Dirty Harry, Jacob Miller, and more, it’s one of the best reggae movies in history.

When we get to Jack Ruby’s yard, around seven, the place is packed. There are hundreds of people there, already spilling out onto the street. His monstrous amplifier, “The Boss,” is causing a continuous local earthquake. I am running a fever and have nobody to assist me. Otherwise, things are looking great. Leroy Smart, Doctor Alimantado, Dirty Harry and another dread, unimaginatively called “D.J,” are up from Kingston, “barking” in their three-piece suits and hats. Eugenie has dressed Bongo Herman in a metallic green suit and matching hat. He looks, and acts, like an oversexed June bug. His two wishes, to be seen rubbing against a fat girl and jumping the fence when the police arrive, will be met in the course of the evening.

The number of photos taken during the process of filmmaking of this important film is staggering, and it’s all been captured by Bafaloukos. Whether it’s production stills or the realistic portrayal of everyday life in Jamaica, the director has captured the essence of Jamaica in the 1970’s perfectly. These photos are really important, as they give the reader a serious look behind the making of the film and Jamaican life. Simply stunning in our opinion.

Check out the trailer for the release of the book below: